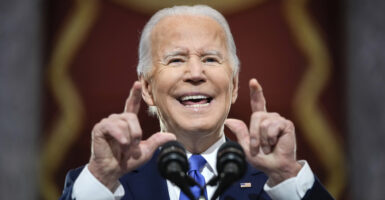 Recent moves show President Joe Biden, here making remarks on the first anniversary of the Jan. 6 riot at the Capitol, is willing to use the tools at his disposal to silence or punish political opponents. (Photo: Drew Angerer/Getty Images) 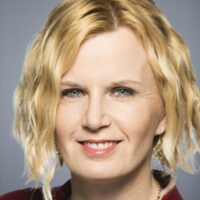 The Justice Department last week announced creation of a domestic terrorism unit to focus on a purported significant threat facing America. Also last week, President Joe Biden accused those who disagree with a federal takeover of state elections of being racists, and he directed Big Tech to censor more COVID-19 “misinformation.”

Taken together, these moves suggest that Biden is willing to use the tools at his disposal, from the bully pulpit to his ideological alliance with Big Tech, and even federal law enforcement, to silence or punish political opponents.

Olsen said he is focused on the threat of Americans “motivated by racial or ethnic animus” and those who “hold anti-government or anti-authority views,” as if challenging the government or those in positions of authority was somehow a dangerous thing in and of itself.  In contrast, the assistant attorney general barely gave lip service to foreign terrorist groups such as ISIS and al-Qaeda.

The Justice Department doesn’t need a separate domestic terrorism unit. Olsen’s National Security Division already has a counterterrorism section with lawyers who, as he stated, are all equipped to work on both domestic and international terrorism prosecutions. Creating another office needlessly enlarges an already bloated bureaucracy and is a waste of taxpayers’ money.

The biggest danger is that this new unit will be used in a partisan way to target Americans based on their speech or beliefs (e.g., Proud Boys) while ignoring others for theirs (e.g., Antifa).

If the Justice Department is so concerned with violent extremists who are motivated by racial or ethnic intolerance and by anti-government, anti-authority attitudes, why not prosecute the violent, race-based Black Lives Matter rioters or members of the “anti-fascist” Antifa who attacked law enforcement officers and buildings (including those belonging to the government) during all of 2020?

Instead, officials and other activists on the left ignored or severely downplayed such rioting and looting during an election year. Political leaders such as then-Sen. Kamala Harris, D-Calif., encouraged Americans to bail out rioters, and George Soros-backed rogue prosecutors refused to seek their detention or prosecute them.

If the Biden administration had integrity, it would punish those violent rioters in the same way it is punishing those who rioted Jan. 6 at the Capitol. Unequal enforcement like this raises worries that the administration will use this new domestic terrorism unit selectively to target political opponents.

Make no mistake, criminal conduct that properly falls within the Justice Department’s jurisdiction should be prosecuted. But when the government ignores some conduct and targets other conduct simply because of politics, it undermines the rule of law and Americans’ faith in government.

Any prosecutions that the domestic terrorism unit pursues must be for actual threats or use of violence. A real danger exists that the Justice Department will go after people who utter what the left calls hate speech as “aiding and abetting domestic terrorism.”

The left previewed this tactic this past week. At the hearing, multiple Democratic senators portrayed local school board meetings as violent, in line with Attorney General Merrick Garland’s Oct. 4 memo directing the FBI and U.S. attorneys to address, report, and respond to school board threats.

Sens. Richard Blumenthal of Connecticut, Sheldon Whitehouse of Rhode Island, and Richard Durbin of Illinois described parents’ participation in school board meetings as violent, suggested that parents are domestic terrorists, and asked Olsen why his National Security Division isn’t investigating.

The truth is that there is very little violence at school board meetings, none of it comes close to terrorism, and such incidents have been handled adequately by local law enforcement.

In contrast to his Democratic colleagues, Sen. Charles Grassley, R-Iowa, properly noted the chilling effect on free speech when the government labels conservative Americans as terrorists.

Committee Democrats also prodded the Justice Department to pursue more and tougher prosecutions for some Jan. 6 participants. Olsen testified that of the more than 725 arrested as a result of their actions Jan. 6, none has been charged with insurrection, yet both Blumenthal and Sen. Mazie Hirono of Hawaii bemoaned that the Justice Department has not sought enhanced terrorism penalties.

By prioritizing prosecution of “domestic terrorists” among Jan. 6 protesters and at school board meetings, the Biden administration has taken its eye off  foreign terrorist threats, which should be the No. 1 priority for both the Justice Department and the Department of Homeland Security.

Sen. Lindsey Graham, R-S.C., correctly stated that the fall of Afghanistan, the resurrection of the Taliban and al-Qaeda, and foreign nationals from countries of special interest crossing our open southern border make for a deadly recipe for attacks by foreign terrorists.

Biden isn’t focused on real dangers. Instead, in a divisive speech, Biden labeled Americans who don’t support federalizing state election laws to be on the side of racists and segregationists George Wallace, Bull Connor, and Jefferson Davis.

Two days later, the president blamed unvaccinated and unmasked Americans for the spread of COVID-19 and expressly called on social media companies and other media outlets to censor “misinformation” on the pandemic.

Some on the left, including Biden, are too quick to designate speech that they disagree with as “misinformation” or “hate speech”—whether it’s about COVID-19, election laws, transgender athletes, critical race theory, or those with religious objections to same-sex marriage.

Biden’s willingness to demonize his political opponents means that we cannot trust that the Justice Department’s domestic terrorism unit will exercise its power with neutrality and restraint. If this new unit shares the president’s fierce partisanship, its creation represents a danger to the rule of law.