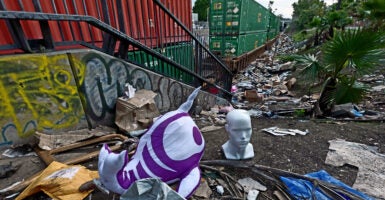 Packaging debris and items looted from rail cars but then abandoned litter train tracks near the the Union Pacific rail yard in Lincoln Heights in Los Angeles on Jan. 15. (Photo: Nick Ut/Getty Images)

When one conjures up fanciful notions of Wild West lawlessness, the image that comes to mind is that of movie scenes of daring train robberies by gangs of robbers on horseback.

It looks like the West is wild once more.

The Los Angeles train robberies don’t look like the daring scenes of old Hollywood Westerns, but they do create an incredible image in their own way.

This train-robbing phenomenon isn’t new, but it is escalating rapidly.

According to Union Pacific Railroad’s senior director of public affairs, Lupe Valdez, from October 2020 to October 2021, train robberies shot up by 356%. Not only that, but the railroad company is considering diverting its trains around Los Angeles to avoid the rampant theft.

“Union Pacific Railroad says 90 containers on average are getting hit each day,” The Wall Street Journal reported. “Thieves climb onto the trains when they stop, use bolt cutters to break into containers and help themselves to the goods, discarding what they don’t want or can’t carry.”

The result is undelivered packages and garbage strewn along the railroad tracks.

California Gov. Gavin Newsom on Jan. 20 visited the site of the wreckage and spoke about how terrible it all looked. He acknowledged that the mess made California appear to be a “Third World country.”

While making his comments, Newsom apologized for using the word “gangs” to describe the gaggles of looters who had committed the robberies.

“Forgive me for saying ‘gangs.’ That’s not a pejorative,” he said. “They’re organized groups of folks that move from site to site.”

And some members of the California media got in a huff about his use of the phrase “Third World country.”

It was all par for the course on the Left Coast these days, though it’s a telling glimpse into the mentality that has allowed the Golden State to decay in recent decades.

It’s hard not to see the looting as a sign that civilization itself in California is shifting into reverse. Los Angeles already suffers from outbreaks of medieval diseases, such as typhoid and tuberculosis, due to the horrifically unsanitary conditions of the city’s homeless population. So, why not Old West-style train robberies, too?

There may be many reasons for the sudden uptick in train robberies. However, it’s hard to overlook the general breakdown in law and order in Los Angeles that has coincided with the national violent crime spike.

The city’s George Soros-backed district attorney, George Gascon, has pursued a course of not prosecuting basic crimes in the city and generally taking a lenient approach to criminality, to say the least.

Union Pacific took specific aim at Gascon for creating an environment where the train robbers are quickly back on the street after committing their crimes. Union Pacific’s general director of public affairs, Adrian Guerrero, wrote a letter to Gascon demanding action, according to The Washington Free Beacon.

These lines were particularly scathing:

Criminals are caught and arrested, turned over to local authorities for booking, arraigned before the local courts, charges are reduced to a misdemeanor or petty offense, and the criminal is released after paying a nominal fine.

In fact, criminals boast to our officers that charges will be pled down to simple trespassing—which bears no serious consequence.

Increased presence of roaming criminals doesn’t just hurt the people of Los Angeles, it affects everyone. It creates an environment of lawlessness for organized crime to thrive. And when criminals loot trains over and over again, not only does it directly delay (or prevent) goods from arriving at their destination, it creates a ripple effect of bad outcomes.

The railroad pays more for security, and insurance must cover damages, both expenses that will be passed along to customers. Railroad personnel are often injured in the robberies. Plus, the already wheezing supply chain is handed another weak and breaking link.

“L.A. has been a hub of major shipping woes in recent months, with the ports of Los Angeles and Long Beach a prominent fixture of global supply bottlenecks,” Yahoo Finance reported. “The twin hubs handle about 40% of the nation’s maritime imports, with the majority of nearly $450 billion worth of goods eventually moving by rail.”

Union Pacific operates in 23 states across the West. So, railroad thefts in Los Angeles might result in empty store shelves in, for example, Wichita, Kansas.

That’s a big deal for Americans, one with national implications. Given that it deals with international and interstate commerce, it would presumably be a priority issue for the Justice Department and President Joe Biden’s administration. Right?

“[W]here is the Justice Department on the California train heists? Where is the FBI?” asked the editors at National Review, adding:

We would like to think they are building cases against the organized-crime enterprises and ad hoc theft-fencing schemes behind the crippling spate of train robberies. So far, though, they appear to be AWOL.

Eighteen members of Congress sent a Jan. 19 letter to Attorney General Merrick Garland requesting that the Justice Department “use every tool available to end this type of violence and organized crime.”

One would hope that the Justice Department take this as seriously as it took parents showing up at school board meetings to express concerns about how their local schools operate.