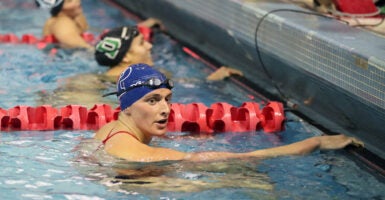 “Lia has every right to compete,” Rice University swim coach Seth Huston says of transgender athlete Lia Thomas. “But I think, black and white right now, you compete as what you were biologically born until we get to a point where we’ve expanded opportunities." Pictured: Thomas during a tri-meet at the University of Pennsylvania Jan. 8, 2022. (Photo: Hunter Martin/Getty Images)

“Lia has every right to compete,” Huston told the outlet, referring to transgender athlete Lia Thomas, a biological male who has been dominating women’s college swimming.

“But I think, black and white right now, you compete as what you were biologically born until we get to a point where we’ve expanded opportunities … I think there’s going to be a lot of frustrated competitors, and families and fans in the sport in the end if we continue down this short-term road right now.”

Will Thomas, now known as Lia Thomas, competed in men’s college swimming for three years before he began to identify as a transgender woman. Thomas now swims for the University of Pennsylvania women’s team and has been shattering records and dominating the sport.

Huston, who was named one of the top 100 greatest coaches by the College Swimming & Diving Coaches Association of America in 2021, is the first active Division I coach to speak out on the transgender athlete debate.

“I just feel like we’re bowing to, in this particular instance, to one person,” Huston said, Swim Swam reported. “And really to the detriment of thousands of other athletes potentially. And I don’t think that’s right.”

Huston expressed support for Thomas’ decision to transition and said the swimmer should still be allowed to compete, according to Swim Swam, but he said Thomas should not compete in the women’s category. He also mentioned the possibility of creating a transgender sports category.

“The NCAA governance has become a bystander waiting for other organizations to make tough decisions,” Huston told Swim Swam. “Again, I’m not saying she can’t compete. But in this instance or in this forum, it’s patently unfair to all the other competitors.”