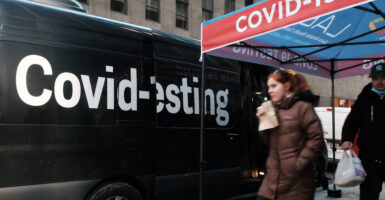 President Joe Biden has a new plan on rapid, at-home COVID-19 testing, but as with much of his administration’s pandemic policy, the plan is convoluted, costly, and late.

Making affordable, rapid at-home tests widely available empowers people to learn their COVID-19 status. Instead of relying on mandates and compulsion, this approach equips people to make informed decisions for themselves and their families.

It’s a good idea and would have been better if launched 18 months ago, or at least a year ago, before the steepest spikes in infections. Rapid tests got tangled in the Food and Drug Administration bureaucracy during the Trump administration, and the Biden administration wove a web of czars, task forces, working groups, and advisory councils that snarled decision-making and garbled messaging.

Despite two presidents who sang the virtues of at-home testing and congressional authorization of $53 billion for COVID-19 testing (of which $29 billion remains unspent), their subordinates never found a way to get rapid tests into the hands of consumers.

Now that the omicron variant appears to be receding, the Biden administration, at last, has a plan. It involves more insurance mandates and the U.S. mail. What could go wrong?

Biden on Dec. 21 announced his plan to mail 500 million tests free of charge. Last week, he doubled down and promised another 500 million. None of them has yet shipped. (You can order your free tests here.)

Don’t expect them to arrive anytime soon. The administration hopes your tests will leave the warehouse within seven to 12 days after you place your order. From there, it will be up to the U.S. Postal Service.

“There are households where there has been no mail delivered for days,” congressional Del. Eleanor Holmes Norton, a nonvoting Democrat representing Washington, D.C., in the U.S. House of Representatives, noted in a letter to the Postal Service. “If we can’t get the mail, how are we going to get these COVID tests?”

Those who hate to wait and have private health insurance (but not Medicare or Medicaid) can choose Plan B. The administration has mandated that your insurer provide you with up to eight free tests every month.

Insurers can meet those requirements by establishing a “direct coverage” option—an arrangement with select retailers to provide enrollees with their free tests. There’s no need for the enrollee to front the money when they pick up tests from those preferred outlets.

What if your insurer’s “select retailer” is out of tests? You can purchase them elsewhere and send the receipt to your insurance company. They will send you a check for $12. Since at-home tests generally cost at least twice that, leaving you to cover the difference, your “free” test could get pricey.

According to a study by the Kaiser Family Foundation, about half of insurers had established the direct coverage option as of Jan. 20, five days after the mandate took effect. Others likely will follow.

If your health plan doesn’t offer direct coverage, you can buy a test, submit a claim, and wait for your check to arrive in the mail.

The administration is launching these rapid-testing programs just as some are questioning their value. A preprint study found that the Quidel and BinaxNOW rapid antigen tests failed to register positive results in some people infected with the omicron variant.

“Rapid antigen tests may not be as fit-for-purpose in routine workplace screening to prevent asymptomatic spread of omicron, compared to prior variants,” the study’s authors concluded. The FDA continues to stand behind these tests.

Despite its flaws and complications, the administration’s testing plan is notionally correct. Government policy on the pandemic should focus on giving people options, not imposing burdens and restrictions.

Such policies haven’t proven effective in reducing the transmission of the coronavirus. France, which has long mandated masks and required vaccine passports, had a population-adjusted rate of daily confirmed cases nearly two and a half times that of the U.S. as of Jan. 22.

And even as Rochelle Walensky, the director of the Centers for Disease Control and Prevention, calls for  “pivoting the language” on the definition of “fully vaccinated” to require a third shot to be considered “up to date,” the booster strategy appears to be failing in Israel, where it has been most aggressively pursued. As of Jan. 22, Israel’s rate of daily confirmed cases was more than triple that of the U.S.

As the national public health emergency enters its third year, it’s long past time for the administration to adapt its approach to the pandemic’s changing nature.

More normal is a strategy worth pursuing.