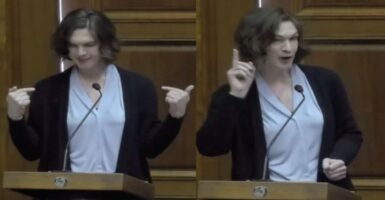 Corinna Cohn (46), a biological man who identifies as transsexual, addresses members of the Indiana House of Representatives on Monday regarding a bill prohibiting biological males from participating in girls sports. (Screenshot)

A biological male who identifies as transsexual tore into opponents of a bill protecting women’s sports, telling Indiana state lawmakers Monday that “it is unfair to expect girls to cede their hard-won rights.”

Following the testimony, 46-year-old Corinna Cohn expressed frustration to The Daily Signal on Monday afternoon that “trans activism has become a zero-sum game.”

“I am privileged to be able to live my life peacefully and enjoy a wide range of civil rights as a trans person,” Cohn said in a Twitter direct message, adding that “trans people enjoy privileges to live as we do, but if we continue to cannibalize women’s rights, the backlash will be severe.”

“I wish that we could all break out of the tribal mentality,” Cohn said, before criticizing women’s advocacy groups for failing to support legislation protecting women’s sports. “I feel distressed that organizations like Planned Parenthood have sold out women.”

Cohn addressed members of the Indiana House of Representatives on Monday regarding HB 1041, a bill prohibiting biological males from participating in girls sports.

“I am an independent and have voted for principled members of each party,” Cohn told lawmakers Monday. “I’m here to speak in support of HB 1041, which aims to strengthen the rights for girls and young women competing in sport.”

“My testimony today is based on my personal opinion as a transsexual,” Cohn continued. “That is, a person who was born male and used pharmaceutical hormones and plastic surgery to feminize my body so that I appear to be a woman. Despite having these procedures, my sex is male and neither science nor medicine can change that.”

I began this process as a teenager, and although my testosterone levels have been in the female range for nearly 30 years, male puberty has endowed me with physical advantages such as height, bone structure, and increased lung capacity. For example, I stand 5’10”, which puts me in the 99th percentile for women’s height. I am just an inch shorter than the elite women athletes in the WNBA. The average male is 5 inches taller than the average female. Banning males from participating in women’s and girls sport would be justified on this basis alone.

Cohn told lawmakers that “everyone can use their own eyes to observe how these advantages play out in the real world,” pointing to the example of biologically male transgender swimmer Lia Thomas, who broke a slew of school and national records set by women.

Thomas’ new records are “records women will be unlikely to ever match,” Cohn said.

“If more males like Lia are permitted to compete against women, it will become common to see women marginalized in their own sport category,” Cohn continued. “I have school-aged girls in my family. I know they often need support and encouragement to stick to competitive activities. When boys are allowed to compete with girls in their own sport, that is one more reason a girl has to talk herself out of participating.”

Cohn pointed out that opponents of HB 1041 use “confusing” language in their discussions of girls sports, such as referring to biological boys “who are being socially and medically treated to mimic members of the opposite sex” as “transgender girls.”

“Just like these youth who are being characterized as ‘trans kids,’ I also suffered gender identity disorder as a teenager,” Cohn said. “We should all have sympathy for these children and ensure they have appropriate treatment. But it is unfair to expect girls to cede their hard-won rights to make room for male students suffering from gender identity issues.”

“In particular, the American Civil Liberties Union is strongly against HB 1041,” Cohn said. “The ACLU is supposed to protect women’s rights, not undermine them. Instead, women and girls must rely on the American Family Association to support their interests. It is absurd and unreal that liberal organizations are turning their backs on women’s rights.”

“Somebody needs to stand up for women and girls, and I feel compelled to do so since so few members of the transgender community have come forward to support them,” Cohn said. “It’s ironic that people who identify as women will not risk defending women against attacks on their rights.”

Planned Parenthood did not immediately respond to requests for comment from The Daily Signal.

The ACLU directed The Daily Signal to an overview of “why policies excluding trans students from school sports are harmful to all women,” as well as several statements of support “for trans students in school sports from major women’s rights groups and cisgender women athletes.”