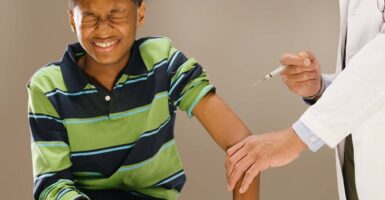 California youths ages 12 and older may soon be able to get vaccines, including for COVID-19, without parental consent, if a bill introduced by a state senator there becomes law.

The Teens Choose Vaccines Act would authorize minors in California to receive any vaccines “approved by the U.S. Food and Drug Administration (FDA) that meet the recommendations of the Advisory Committee on Immunization Practices (ACIP) of the Centers for Disease Control and Prevention.” The bill was introduced Jan. 20 by state Sen. Scott Wiener, D-San Francisco.

A press release from Wiener’s office said the bill would add to existing laws allowing minors to make medical decisions without parental approval, which currently include receiving birth control, abortions, and treatment for sexually transmitted diseases.

“Young people 12 and over are already allowed to make critical decisions about their bodies without parental consent,” the statement reads, “including getting the human papillomavirus (HPV) and hepatitis B vaccines, accessing reproductive health care and mental health care, among other health services. SB 866 would simply build on existing law to expand youth access to vaccines.”

Wiener has stirred controversy in the past for introducing far-left legislation that became state law, including housing transgender biological male inmates in women’s prisons, lowering penalties for knowingly exposing another person to HIV, and making it easier for child abusers to aovid registration on the sex offender registry.

In a statement, Wiener said it was “unconscionable” to deny teenagers a vaccine because a parent is against it.

“Giving young people the autonomy to receive lifesaving vaccines, regardless of their parents’ beliefs or work schedules, is essential for their physical and mental health,” he said. “So many teens want to be vaccinated so that they can lead a more normal life—participating in sports or band, traveling, going to friends’ homes—but they’re prevented from doing so due to their parents’ political views or inability to find the time.”

“This to me seems to be another example of Democrats wanting to remove parents from the equation,” he said. “I think that’s flawed policy. I think parents are vital to these decisions.”