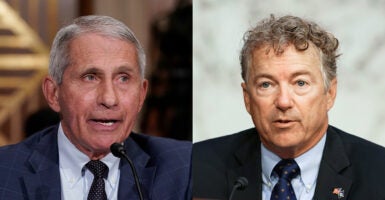 Senators heard from top Biden administration officials Tuesday about the government’s handling of the COVID-19 pandemic, as the omicron variant rages amid a shortage of tests for the disease.

The hearing before the Senate Health, Education, Labor and Pension Committee included another verbal battle between Sen. Rand Paul, R-Ky., and Dr. Anthony Fauci, director of the National Institute of Allergy and Infectious Diseases.

Questions about new health guidance, COVID-19 testing, and other issues also came up.

Among others testifying were Dr. Rochelle Walensky, director of the Centers for Disease Control and Prevention; Dr. Janet Woodcock, acting commissioner of the Food and Drug Administration; and Dawn O’Connell, assistant secretary for preparedness and response at the Department of Health and Human Services.

Here are four key issues raised in the Senate hearing.

“I have heard from so many people who find the latest CDC isolation and quarantine guidance confusing and hard to interpret,” Murray said.

“Dr. Walensky, can you please clearly explain CDC’s latest guidance on what people need to do to protect themselves and others if they are exposed to or contract COVID-19?” Murray asked. “And let me start with vaccinated people. What is your guidance to them?”

The agency doesn’t give different guidance  based on vaccination status for those who contract the disease, Walensky replied.

“If they are exposed to COVID-19 and they are completely boosted, they do not need to stay home, but they should get a test on Day Five,” Walensky said, adding:

If they have COVID, our guidance does not distinguish between your vaccination status. Our science has demonstrated that you’re maximally infectious two days before and two days after. So by five days after your symptoms, if you’re feeling better, if your fever is better, if your coughing and sore throat are better, then you can go out. But you have to wear a mask. You have to wear a mask reliably. You should not go to places where you can’t wear a mask. You shouldn’t go and visit Grandma. You shouldn’t go on an airplane.

“Dr. Fauci, the idea that a government official like yourself would claim unilaterally represent science, and that any criticism of you would be a criticism of science itself is quite dangerous,” Paul told Fauci, who is also President Joe Biden’s chief medical adviser. “Central planning, whether it be science or the economy, is risky because of the fallibility of the planner.”

In November, Fauci had said in a CBS News interview, “I represent the science.”

Paul, who is an eye doctor, brought up some of Fauci’s emails showing that he and Dr. Francis Collins, director of the National Institutes of Health, sought a “quick and devastating published takedown” of epidemiologists from Harvard, Oxford, and Stanford universities who had divergent ideas.

“This is not only antithetical to the scientific method, it’s the epitome of cheap politics,” Paul said to Fauci.

Fauci noted that the email in question came from Collins to him.

“In usual fashion, Senator, you are distorting everything about me,” Fauci said.

He later added:  “As usual, Senator, you are incorrect in almost everything you say.”

Fauci said that he and family members have faced threats and harassment. He mentioned a man who was arrested in December for having an AR-15 in his car and saying that he was driving to Washington to kill Fauci and others.

Facui went on to accuse Paul of stirring people up, and showed a printout from the senator’s campaign website that said, “Fire Fauci.”

“So you are making a catastrophic epidemic for your political gain,” he told Paul.

Paul responded that Fauci did not address his questions.

“You have politically attacked your colleagues in a politically reprehensible way, to attack their reputation. You won’t defend it,” the Kentucky Republican said.

Paul later told Fauci: “Yes, there is a great deal of dissatisfaction with you, and many people want you to go, but nobody wishes you violence.”

In Maine, she said, manufacturers laid off workers.

As a former assistant secretary of health recently pointed out, a lack of federal orders for tests between January and September of 2021 caused the manufacturers to start reducing their lines and lay workers off.

I don’t believe we are in the position we are in now due to a lack of funding, but rather a lack of planning. My question to you is, has any of this funding—this close to $83 billion that was supposed to be used for testing—been diverted for other purposes?

“Some of the funds have been used for mitigation efforts,” she added. “For example, when children are crossing the [southern] border, one of our responsibilities that we have within HHS is to make sure that the children who are unaccompanied are cared for. And we used some of the funds to test those children and to separate them from COVID-negative children at the border.”

Appearing unsatisfied with O’Connell’s answer, Collins later pressed the HHS official over money “diverted from the testing budget to deal with the surge of people, including unaccompanied minors illegally crossing the southern border.”

“Again, all of the funds, as they were appropriated to the American Rescue Plan, were for testing, contact tracing, and mitigation efforts,” O’Connell said.

She said funds “were used to test unaccompanied children at the border and then to mitigate the COVID-positive cases so they wouldn’t enter the community and spread COVID.”

The Maine Republican drew a direct connection between the border crisis and the shortage of COVID-19 tests, saying:

The fact remains that if we had the southern border under control, we would be using the $850 million designated for testing to buy more rapid tests. We would be using the money out of the stockpile, the $850 million, for the purposes for which it was intended. So I think that this is a problem that has contributed to the shortage of testing, the uncontrolled crisis at the border.

Burr said he was troubled by the Food and Drug Administration decision to focus on contracting companies that have the “capacity to manufacture more than 500,000 tests per week within three months of being authorized,” he said.

“Why did the FDA … suggest to companies that can’t ramp up to that manufacturing that they’re not going” to be prioritized alongside larger companies, he asked.

Woodcock said the agency prioritized larger companies because of the “urgent need for high volume [of] home-based tests.”

Burr pressed the issue, telling Woodcock that the Food and Drug Administration basically is telling smaller companies, “Don’t innovate because you’re not going to get consideration under the [emergency use authorization] if you don’t have a manufacturing capacity of 500,000 tests a week.”

“It says these are prioritized, it doesn’t say we won’t get to the others,” Woodstock replied, meaning the smaller companies.

Burr continued to pressure those testifying on the details of how the Biden administration planned to incentivize as many companies as possible to manufacture enough tests to meet the president’s pledge of producing 500 million tests.

Beginning Jan. 15, under a new rule from the Centers for Medicare & Medicaid Services, insurance companies “are required to reimburse you at a rate of up to $12 per individual test (or the cost of the test, if less than $12),” an announcement by the agency states.

“Where am I wrong?” he asked O’Connell, the HHS assistant secretary.

O’Connell responded by explaining that the government is continuing “to work to access the tests that will be distributed as part of the $500 million.”

Burr retorted: “I’m not sure you addressed my concern, which is [that] it’s more profitable to sell to the federal government than it is to put it on retail, based upon the reimbursements that this administration has now required of insurers.”

At the end of the hearing, Burr addressed those testifying with sympathy, saying, “You guys have a tough job.”

But the senator admonished Fauci, Walensky, Woodcock, and O’Connell to be more careful about making promises to Americans.

“Testing’s broken. … When you guys huddle inside the COVID team, try to get the administration to refrain from making these proclamations until we have the product,” Burr said, adding:

We’re now three weeks since the president said we’re going to buy 500 million tests. We have 50 million currently contracted. I don’t know how long it’s going to take to get the rest of the contract.

A quote from Fauci that had been deleted inadvertently was restored within 24 hours of publication.