Joe Manchin Should Be Celebrated for Putting Families First 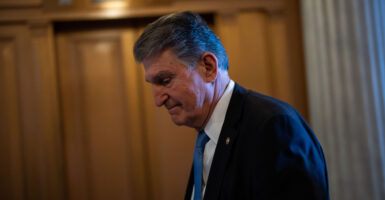 Sen. Joe Manchin, D-W.Va., has upset fellow Democrats by saying he would vote against the Build Back Better Act, a giant social spending bill.

Manchin has made the right call. Among many other things, Democrats’ legislation would extend President Joe Biden’s expanded child tax credit payments. If the tax credit had been extended into 2022, as Biden and congressional Democrats proposed to do in the Build Back Better Act, it would have undermined antipoverty efforts for a generation and wiped-out work among low-income Americans.

Earlier this year, Congress transformed the pro-work child tax credit into a monthly child allowance. As of July 15, families with children have been receiving monthly payments of $250 or $300 per child—no work required.

The child tax credit was originally designed to do just that, increasing as low-income parents work more. But over the past six months, the Biden administration’s child allowance did the opposite by sending checks to families regardless of whether they work.

The outcome of continuing this policy would have been fewer low-income families working.

Liberals have insisted that Biden’s child allowance wouldn’t substantially affect low-income parents’ interest in work. But a groundbreaking study made it clear that they were wrong.

Researchers at the University of Chicago found that 1.5 million Americans—about 2.6% of all working parents—would exit the labor force if Congress made the Biden child allowance permanent.

In fact, that exit from the workforce may have started when the first child allowance checks went out in July. While parents had been working more than nonparents in the first quarter of 2021, that trend reversed. Between March and October 2021, parents with children under 18 had an employment gap that was 2.1 percentage points higher than nonparents.

Sitting on the sidelines hurts low-income families in any economy. But with the economy we have now—where inflation hit 6.8% over the past year and 11 million jobs are open—it’s unthinkable.

And it’s not just computer models used by researchers telling us the truth that work matters.  History does too.

If Manchin hadn’t blocked the Biden child allowance, more families would be stuck in permanent poverty.

Combined with other federal transfer payments, unemployed families would’ve been able to receive more than they could before Congress reformed welfare in 1996. Then, Americans agreed on a bipartisan basis that those who could work either had to work or prepare for work in order to get welfare assistance.

Before the 1996 welfare reform law, the long-term effect of providing monthly welfare checks to low-income families who didn’t work was devastating.

Welfare dependence exploded. Nearly 9 in 10 families receiving benefits were unemployed. As part of this safety net, some 90% of cash recipients were single mothers. The majority of families found themselves trapped in long-term poverty, staying on welfare rolls for an average of eight years.

Extended welfare dependence also has a negative impact on children. Before welfare reform, 1 in 7 children lived in dependent families. A mother’s welfare dependence was associated with a reduction in her child’s test scores in math and verbal ability.

Even one year of exposure to welfare in early adolescence was “associated with a reduction in schooling of about 0.3 year.” Welfare even had a negative effect on earning outcomes for boys after age 25.

In 1996, Americans broadly agreed our national welfare system kept people in poverty, for the simple reason that it discouraged work. Then-Sen. Joe Biden, D-Del., said: “Work should be the premise of our welfare system.”

Some on the left asserted that poverty would increase, yet the opposite happened. Dependency declined for the first time in a half-century. Single mothers who worked rose from 51% in 1992 to 76% within eight years.

The most significant result was that child poverty, stuck for decades, fell sharply by almost 8% over the following decade.

It’s undeniable that moving from welfare to work financially benefits families. Those who stay dependent indefinitely obviously lose a lifetime of higher earnings.

But work also affects well-being. It is associated with a higher degree of human connectedness, while unemployment can negatively impact mental health and physical health, even affecting mortality by as much as a year and a half.

So Manchin was right to be worried about separating welfare from work. Low-income individuals, like all Americans, deserve real opportunity for themselves and their children.

Manchin should be celebrated for putting families first.