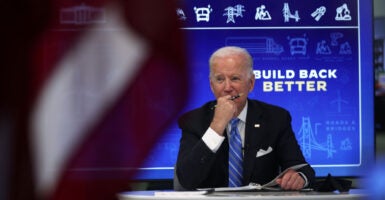 With the Biden administration’s plan to bring back unconditional cash payments and make them permanent, there is a serious danger of reversing the positive outcomes of the 1996 welfare reform. (Photo: Alex Wong/Getty Images)

The following is an open letter to policymakers from 18 leaders in family and anti-poverty studies, whose names are  listed at the end.

Policymakers who are concerned about low-income Americans should reject the Biden administration’s plan to make new unconditional cash payments permanent in the form of a child allowance. Policymakers should not support this ill-advised attempt to expand safety-net benefits without making them conditioned on work or preparation for work.

All congressional leaders should know: This policy could set back the progress this country has made against child poverty and leave low-income Americans behind.

The new program is incredibly expensive, and would be layered on top of nearly half a trillion dollars dedicated every year to the safety net for low-income American families with children. If made permanent, these cash payments would cost an additional $1.6 trillion over the next decade.

But the worst aspect of this new program is that it likely will not help low-income Americans in the long term.

We’ve been down this road before. Before 1996, the Aid to Families with Dependent Children program operated similarly to President Joe Biden’s plan. This program provided low-income recipients with monthly cash payments without requiring them to work or prepare for work.

Before the Aid to Families with Dependent Children program was reformed, work among the recipient parents was very low: only a little over 1 in 10 families included a worker. Most families were stuck in long-term poverty. The majority of families then on the rolls received the benefits for more than eight years. Unwed births rose year-over-year for decades. And all of this made intergenerational child poverty worse: 1 in 7 children were dependent on Aid to Families with Dependent Children benefits.

For this reason, conservatives and moderates led the way to transform the safety net, culminating in a bipartisan welfare reform bill in 1996, which was supported by then-Sen. Joe Biden and signed by President Bill Clinton. The reform required recipients to work or prepare for work in order to receive cash benefits.

While the left predicted that poverty would increase, we witnessed the exact opposite. Dependency declined for the first time in a half-century. Employment rose, particularly among single mothers who didn’t graduate high school. Child poverty, which had been static for decades, fell sharply.

With the Biden administration’s plan to bring back unconditional cash payments and make them permanent, there is a serious danger of reversing the positive outcomes of the 1996 welfare reform. In fact, it could increase child poverty in the long term.

Why? Because in the Biden plan, all the obligations are on the taxpayer and society—recipients do not have to work or participate in activities like training or education that could help them return to the workforce. The U.S. experience with unconditional aid is clear: Subsidizing nonworking families generally leads to more families trapped outside the workforce.

The policy may also subsidize single parenthood, thereby undermining the chance that children will be raised by a married mother and father, which we know provides the best environment for children.

Add this dynamic to other safety net benefits that penalize marriage, such as the Earned Income Tax Credit, and the chances that low-income children live with a single parent increases. Any of these results are unacceptable.

There are better ways to address poverty and the challenges working families in this country face. Instead of this expensive and ultimately counterproductive policy, policymakers should expand school choice in education, orient more benefit programs to promote work, and end disincentives to marriage, among other positive reforms.

Policymakers should reject the Biden plan for permanent, unconditional cash payments in the form of a child allowance and join thought leaders across the political spectrum to seek true opportunity for low-income Americans.

*All affiliations listed are for identification purposes only, and do not necessarily reflect the views or positions of the institutions themselves.