Despite What the White House Says, Obamacare Is Deeply Troubled 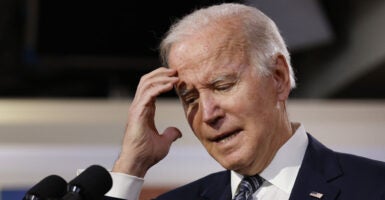 Even though the Biden administration says things have never been better when it comes to healthcare, the opposite is true. Premiums are ticking down only after rising for years. Much of the coverage on offer confines enrollees to narrow networks of covered doctors and hospitals. And enrollment is up largely because the government is picking up a major share of most beneficiaries’ premiums. (Photo: Chip Somodevilla/Getty Images)

Sally C. Pipes is president and CEO of Pacific Research Institute, where she also is the Thomas W. Smith fellow in health care policy. Her latest book is "False Premise, False Promise: The Disastrous Reality of Medicare for All" (Encounter, 2020).

Open enrollment on Obamacare’s health insurance exchanges is in full swing. Consumers in most states, including the 33 that use the federally operated HealthCare.gov, have until Jan. 15 to sign up for coverage for 2022.

The Biden administration says things have never been better, and that premiums are declining, more insurers are participating in the markets, and enrollment is at an all-time high.

Dig a little deeper, and Obamacare’s troubles become evident. Premiums are ticking down only after rising for years. Much of the coverage on offer confines enrollees to narrow networks of covered doctors and hospitals. And enrollment is up largely because the government is picking up a major share of most beneficiaries’ premiums.

Rather than fix these problems, the Biden administration wants to obfuscate them—by lavishing even more taxpayer money on the exchanges.

Premiums have retreated slightly over the past three years. Yet the average monthly individual exchange premium nationwide doubled between 2013 and 2019—and tripled in five states.

Many enrollees haven’t noticed because taxpayers are covering a significant share of their premiums. Nearly 90% of the exchanges’ 10.7 million enrollees received federal subsidies in 2020.

It’s no wonder exchange enrollment is at a record high. Taxpayers are essentially paying people to sign up for coverage.

Those sky-high premiums don’t buy much in the way of coverage. Roughly three-quarters of exchange policies feature narrow networks. Beneficiaries can only choose from a limited number of doctors and hospitals.

Insurers employ these narrow networks to keep their own costs down amid Obamacare’s myriad regulations, which mandate that they cover 10 essential benefits and prevent them from charging the old any more than three times what they charge the young.

Each additional benefit costs money. If insurers can confine their beneficiaries to a narrow network, they may be able to convince providers to accept lower reimbursement rates.

Beneficiaries, meanwhile, may give up on seeking marginal care if one of the few providers covered is inconveniently located, or if they can’t get an appointment.

You’d think a program that features rising premiums for low-quality coverage needs reform. Instead, the Biden administration wants to double-down on the exchanges’ failing structure.

In March, President Joe Biden signed the American Rescue Plan Act into law, which increases subsidies for everyone shopping on the exchanges with income up to 400% of the federal poverty level—about $106,000 for a family of four—through 2022.

The law also caps premiums for people who make more than four times poverty at 8.5% of income. This was the first time that this group of six-figure earners qualified for taxpayer-funded coverage— “welfare for the wealthy.”

These expanded subsidies cost $34.2 billion. Most of that money is going to people who already have insurance, including reasonably wealthy families that are newly eligible for subsidized insurance.

As part of the stalled Build Back Better proposal, Democrats want to extend those subsidies through 2025. The Congressional Budget Office estimates the cost of this effort at $209.5 billion. Democrats will surely try to make those more generous subsidies permanent if they can increase their margins in Congress during next fall’s midterm elections.

As with the temporary expansion, a huge portion of this money would go to the wealthy. The Congressional Budget Office predicts that 65% of new Obamacare enrollees would earn more than 400% of the federal poverty level under Democrats’ plan. Many of them would be newly eligible for subsidies.

More generous premium subsidies will fuel healthcare inflation, as insurers realize they can raise premiums with impunity since no one would be paying any more than 8.5% of their income for coverage.

Finally, this new subsidy regime could encourage employers, especially small ones, to drop their plans. The Congressional Budget Office figures that expanded subsidies would increase Obamacare sign-ups by 3.6 million and cut enrollment in employer-provided insurance by 1.6 million, “primarily driven by a reduction in offers as a response to the increased subsidies for coverage through the marketplaces.”

The Biden administration’s drive to pump billions more into Obamacare’s exchanges this open enrollment season is a sign of just how dysfunctional the marketplaces have become.