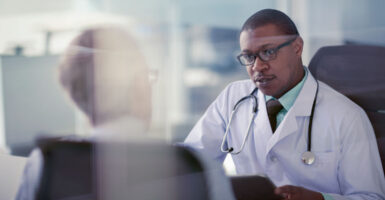 A new data tool from The Heritage Foundation clearly displays hikes in insurance premiums and other effects of the Affordable Care Act, both nationally and in your state. (Photo: Shannon Fagan/Getty Images)

One of the main goals of Obamacare, formally known as the Affordable Care Act, was to make individual insurance cheaper and more accessible for Americans.

The health care law imposed new mandates and regulations on the market for individual insurance, and the data indicates these reforms did exactly the opposite of the goal: In nearly all states, conditions in the individual market have worsened dramatically.

Choices in health insurance decreased as the number of insurers participating in the individual market fell, while insurance premiums increased more than 50% nationally. The results of Obamacare not only have been less choice and competition, but higher premiums for Americans.

A new data tool from The Heritage Foundation clearly displays the effects of the Affordable Care Act both nationally and in your state. (The Daily Signal is Heritage’s multimedia news organization.)

>>> Find out how much more insurance costs in your state since Obamacare took effect: “Heritage’s New Data Tool—Health Care Choices and Premiums Under Obamacare: What’s Going On in the States.”

Obamacare’s mandates and regulations dramatically increased the cost of health insurance in the individual market in nearly all states. In fact, the cost doubled.

Even more concerning, five states (Alabama, Nebraska, Missouri, West Virginia, and Wyoming) saw average monthly premiums triple. Only one state, Massachusetts, had a lower monthly premium in 2019 than in 2013.

The good news? Data indicates that the damage from Obamacare doesn’t have to be permanent.

In six states that received federal relief from Obamacare’s mandates in the form of Section 1332 waivers, average premiums declined after reaching peak points before waivers were implemented. Most notable is Alaska, where monthly premiums reached an exorbitant $956 in 2017 and have come down 23% to $737 since then.

The market hit rock bottom in 2018 with only 181 insurers. Although the number of insurers has increased over the past three years thanks to the Trump administration’s regulatory relief, this still leaves the 2021 exchanges 36% less competitive than the individual market was before Obamacare.

Additionally, data shows that even with the increase in insurer participation in recent years, only five states have more insurers offering coverage in the individual exchange in 2021 than before the Affordable Care Act. Seven states have the same number of insurers, and 38 states and the District of Columbia still have fewer.

That means roughly 10% of state insurance markets have benefitted from increased participation, while 14% are the same and 76% are worse off.

I generated the data for this tool as co-author of two papers with Ed Haislmaier, a senior research fellow in health care policy at Heritage:  “Obamacare Has Doubled the Cost of Individual Health Insurance” and “Obamacare Exchanges in 2021: Increased Options, but Less than Pre-ACA.”

More than a decade after passage of the Affordable Care Act, Americans buying health insurance under the law are still much worse off financially than before Obamacare was enacted.

Overall competition and choice in insurers are no better than when the law took effect in 2014. The market is still drastically less competitive than it was before.

Reforms that Obamacare architects claimed would lower the price of insurance have had the opposite effect. Some states have found relief in the form of the Section 1332 waiver, and data from recent years show that costs drop when states can use regulatory relief to provide options tailored to the unique needs of citizens who have high health costs.

Congress should build on this success by enacting the Health Care Choices plan, which codifies the Trump administration’s regulatory relief and builds on it with further relief.