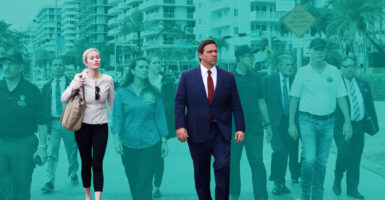 Christina Pushaw is not afraid to get down in the dirt with reporters who go after her boss.

Florida Gov. Ron DeSantis’ press secretary has repeatedly called out the press for “bad-faith coverage” and “skewed” or biased reporting, such as when the Associated Press implied in August that DeSantis was promoting monoclonal antibody treatment for COVID-19 cases out of his own financial interests.

“They’re afraid of the governor,” Pushaw said in an interview with The Daily Signal, pointing to national media focusing their attention on Florida news. “The left-wing elites, the establishment, and the corporate media are very much afraid of him. And it shows that he’s a good leader, and that he’s doing a good job.”

Pushaw’s vigor in defending the governor from the Associated Press ignited a social media firestorm, drawing national attention. Twitter temporarily suspended the press secretary after she told her followers to call out the author of the Associated Press article. (She later deleted her tweet, saying that she did not want it to be misinterpreted.)

Journalists criticized her actions, and the AP itself accused her of bullying.

Both the White House and federal health officials have since expressed strong support for monoclonal antibody treatment, prompting many on the right to accuse the Associated Press of orchestrating a hit job on the Florida governor.

That wasn’t the first time DeSantis has been on the receiving end of such treatment, and according to Pushaw, it won’t be the last.

The “60 Minutes” segment quickly unraveled as critics pointed out that, among other errors, CBS had aired edited clips of DeSantis explaining why Publix was distributing the vaccines.

“I often say I wish I didn’t have to call people out on Twitter or be confrontational,” Pushaw told The Daily Signal. “I always try to speak directly with the reporter first and see if I can get all their questions answered and get the information to them that they’re looking for.”

“But the thing is,” she added, “if I do that, and they publish something that’s not true, then I have no choice but to say something direct and publicly about it and to condemn this.”

Of all the “reprehensible” liberal media attacks on DeSantis, she finds the narrative that he is concealing COVID cases and deaths in Florida the most frustrating.

“It is so ridiculous,” Pushaw said, “but the media promoted this conspiracy theory so relentlessly that countless Americans still believe it.”

The mask and vaccine mandate, pro-lockdown establishment elevated that narrative “because they cannot accept Florida’s success,” she said.

“Florida under Gov. DeSantis has proven that restrictions are unnecessary and do more harm than good,” she added. “That’s why so many people are moving here from all over the USA, particularly from Democrat-run areas.”

Whether on the White House lawn, in the press briefing room, or on Twitter, former President Donald Trump aggressively engaged with hostile media at all hours of the day and night. He often singled out reporters like CNN’s Jim Acosta or The New York Times’ Maggie Haberman over Twitter until the platform permanently suspended him on Jan. 8.

The president coined the term “fake news media” and urged his supporters not to trust media representations (or misrepresentations) of his presidency, including the false claims that he ordered protesters to be tear-gassed for a photo-op, that he called white supremacists “fine people” and illegal immigrants “animals,” and more.

Like Trump, Pushaw said, DeSantis is not bashful about defending himself.

“Why don’t you do your job? Why don’t you get this border secure?” DeSantis fired back at President Joe Biden in August when the president criticized Florida’s pandemic response. “Until you do that, I don’t want to hear a blip about COVID from you.”

“He will fight back if he feels that he’s been treated unfairly, and it happens a lot that the media does treat him unfairly over different issues,” Pushaw said, referring to the Associated Press’ suggestion that DeSantis was promoting monoclonal antibodies for nefarious purposes.

“The media doesn’t imply that anyone else is just doing this for money,” she said. “But why did they attack Gov. DeSantis for that?”

Unlike Trump, however, DeSantis does not personally attempt the direct social media attack strategies.

“If you look at his Twitter account, for example, or any of his social accounts, he doesn’t really engage with others. He uses them to put out information, announcements, things like that,” Pushaw explained. “It’s very professional, what you’d expect of a politician.”

“Now, obviously, my account is more conversational,” she said. “Being faced with this kind of bad-faith coverage and willfully biased and skewed coverage from a lot of the mainstream media outlets, I think that really feeds into my style.”

DeSantis doesn’t have the time to be on social media, the press secretary told The Daily Signal, and by being “a lot more active” and “less formal” than the governor, Pushaw can fight back when the governor is misrepresented.

Pushaw is well aware of a key component of the Trump presidency; specifically, the quick stardom of liberal reporters who antagonized the president.

“My impression is that sometimes if a governor gets on the level of tweeting at a reporter … then that kind of elevates the reporter,” she said. “They might enjoy engaging in those kinds of fights with the governor, because obviously he’s an important person. And so they can make another news cycle out of their fight with the governor.”

Pushaw suggested that her interactions with liberal media are much less of a story than DeSantis’ interactions would be, since she is a staffer and frequently engages with the reporters.

But the press secretary said she has learned to choose her battles wisely, to focus on fighting the narratives that are a high priority with the governor, and to argue with facts.

“Before I will ever get into a fight, or try to push back and set the record straight publicly, I will always make sure that I have all the facts,” she said. “If I’m claiming that somebody wrote fake news, I’m going to find out exactly why it’s fake and exactly what’s factually incorrect about it.”

“I’m not an epidemiologist or a scientist,” Pushaw said. “So, in some cases, when it’s about COVID, I will have to go to the health department, for example, and get information from them. But I just want to make sure everything that I’m putting out there is absolutely true, because even if I make one small mistake, it’s going to reflect badly on the governor, and it’ll be used to discredit everything I say.”

Reporters like Acosta who made a household name for themselves during the Trump administration loved the attention they received from Trump’s criticisms, Pushaw said.

But she shied away from comparing Trump and DeSantis too much, calling them “two different people with two different approaches.”

“They do align on a lot of policy issues,” she said. “They have a good relationship.”

“I’m a huge supporter of the media when the media plays its important role of getting back to people, getting facts to the public and holding all elected officials accountable, Republican or Democrat,” she added. “But when they’re not doing that, and they’re just trying to promote themselves or be activists, then I don’t think we have to elevate them.”

At the end of the day, Pushaw said, she is lucky to work for someone like DeSantis who knows exactly what he stands for.

“He’s clear, he’s consistent, and he doesn’t just say stuff,” she said. “He thinks before he speaks, and he doesn’t put stuff out there that’s not true or that can’t be backed up with facts.”

That makes her job much easier than that of White House press secretary Jen Psaki, Pushaw said, who daily has to justify Biden’s comments.

“I think her approach is really great, and I want to learn from her,” Pushaw said.

“She’s an amazing mom,” Pushaw said of Casey DeSantis. “Does so much for our state, and has courageously shared her story of being diagnosed with breast cancer at the young age of 41 to motivate other people to get screened for cancer.”

“Early detection saves lives,” Pushaw added, “and I have no doubt that she has saved lives by being so open about her journey.”