Here Are the Facts About Spikes in Crime That Sen. Dick Durbin Didn’t Want Me to Share 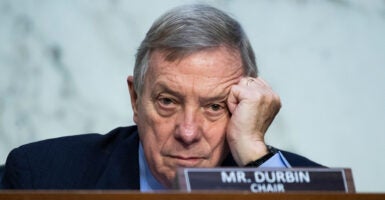 It’s no secret that Chicago, like many major U.S. cities, has suffered from an unprecedented spike in homicides and non-fatal shootings over the last two years. Despite seeing record low homicide rates between 2004 and 2015, Chicago residents are now experiencing violent crime at levels unseen in decades—including truly horrific surges in gun violence during 2020 and 2021.

One important factor driving this violence is the failed leadership of Chicago’s mayor and city council, particularly their general lack of support for the Chicago Police Department. Chicago’s progressive prosecutors have exacerbated this problem by routinely allowing violent offenders to run amok without any meaningful consequences.

And yet, when I attempted to diagnose this problem at a Senate Judiciary Committee hearing on gun violence in Chicago held earlier this week, Sen. Dick Durbin, D-Ill., twice interrupted my testimony.

The testimony Durbin didn’t want the committee or the nation to hear? A well-publicized story from early October in which gang members lit up a residential Chicago neighborhood with gunfire on a Friday, only to be inexplicably released without charges by Monday.

It seems that Durbin was more interested in using Chicago residents as political pawns than in understanding why Chicago’s criminals feel free to shoot whomever they want without fearing consequences.

Below is an abridged version of my written and oral testimony, in which I point out how Chicago’s progressive prosecutors are allowing lawlessness to tear the city apart. You can read my full written submission here.

No Quick Fixes: Debunking the Illusion of Easy Answers and Simple Solutions to Recent, Unprecedented Spikes in Gun Violence

For almost 30 years, this nation experienced a general downward trend in violence, including gun violence, even as the number of privately owned guns steadily rose.

Then, very suddenly, in early 2020, not just in Chicago but the nation experienced an unprecedented surge of homicide and gun violence. The national homicide rate spiked 30 percent, the highest single year increase in history. Virtually every major city has experienced significant increases in homicide since 2019, and a dozen cities have already set new records this year for annual homicide numbers. We could just as easily be in Philadelphia, or Portland, or back in the Senate building in Washington, D.C.

We’re all here today because we recognize that this unparalleled, acute spike in needless violence and death is a very serious problem, and we are invested in the same goal of saving lives. No one fails to understand the devastating nature of this trend. The question is how we understand its causes and potential solutions.

It’s very clear that something—or, most likely, some combination of things—happened in 2020 to abruptly reverse a decades-long national trend. And yet, there has been an unfortunate tendency to resort back to standard, politically expedient talking points—to blame, for example, surges in legal gun sales or supposedly “lax” gun laws in neighboring states.

These factors, however, are not the driving forces behind recent nationwide spikes in gun violence. There are, in fact, far better answers to the question of “what changed in 2020?” In short, a combination of several different factors—some of which arose rather recently and very suddenly—that combined to create a perfect climate for violence.

There is substantial evidence that police departments around the nation suddenly and significantly altered the ways in which they deployed resources and interacted with communities as a result of COVID-related necessities, widespread civil unrest, and high-profile anti-police sentiment. These changes very likely played and continue to play a role in the ability of impacted police departments to deter criminal acts, investigate violent crimes, and bring the perpetrators of those crimes to justice before they can reoffend.

Consider the slew of problems faced by officers during the height of the pandemic, when many departments found their ranks decimated by the virus itself. Almost overnight, police forces around the country began taking steps to minimize interactions with civilians.

This not only hampered proactive policing efforts but also brought community policing tactics and outreach initiatives to build trust to a screeching halt. At the same time, in many cities, officers were diverted to the enforcement of COVID-19-related social distancing and closure orders.

There is also ample evidence that widespread social unrest and the high-profile proliferation of anti-police sentiment measurably shifted the deployment of police resources and led to unconscious (or perhaps entirely conscious) changes in policing styles.

Because proactive, officer-initiated law enforcement is precisely the type of policing designed to disrupt patterns of violence, its sudden scaling back was bound to have devastating consequences for gun violence.

Worse, it coincided in many cities with “defunding” measures, the cutting of vacant job openings, higher rates of retirement or quitting, and lower recruitment rates to fill the emptying ranks.

There is certainly room for good faith discussions about criminal justice reform, including bail reform. But these reforms must be tempered by reality, especially where violence is involved, and the overall safety of the public is at stake.

Far too many rogue prosecutors and other local officials, including Kim Foxx, the state’s attorney for Cook County, have implemented poorly designed bail reforms and lenient prosecutorial tactics. The devastating results of these practices pre-date the 2020 homicide spike, but the problem has certainly been exacerbated during the last two years.

This is not speculation. This is hard data. Defenders of Cook County’s 2017 bail reform measures only succeed if they are permitted to fudge the numbers and mischaracterize reality. A comprehensive February 2020 study took a harder look at the actual numbers and found that, after the new bail policies were implemented, 33% more released defendants were charged with committing new violent crimes.

As of Dec. 10, at least 56 defendants released on felony bail in Chicago have been accused of killing or trying to kill someone, with 83 additional victims involved in their violent crimes. Moreover, violent crime clearance rates in Chicago and other cities are abysmally low. We have very little idea who, specifically, is committing most violent crimes, and it’s statistically almost certain that we dramatically undercount the rates at which many violent offenders released on felony bail continue to re-offend.

This problem is not unique to Chicago. Rogue prosecutors from Philadelphia to Los Angeles are forcing communities to reap the consequences of their progressive and overly lenient policies.

Nothing could capture the breadth of this problem better than one recent and illustrative example of how rogue prosecutors embolden criminals and facilitate violence.

In broad daylight on a Friday morning in early October, during an intra-gang dispute, four people drove up to a house in a residential Chicago neighborhood and indiscriminately opened fire on it. Individuals inside the house shot back. In total, at least 70 rounds were fired, one man was killed, and two more were injured. The entire shootout was apparently caught on video.

And yet, by Monday, all five suspects had been released without charges, and without any subsequent attempt to charge them. According to police reports, the state attorney’s office cited “mutual combat” as the reason for declining prosecution. Let me assure you, that’s not how the defense of mutual combat works.

It is truly astounding that rogue Chicago prosecutors have reached a point where they will release suspects who fired dozens of rounds into a residential neighborhood during an unprecedented spike in homicide and, with a straight face, tell the community, “It’s fine, they only shot at each other.” Which at the same time tells those who perpetrate violent gun crimes, “It’s fine, as long as you shoot at each other.”

And then we wonder aloud to ourselves in congressional hearings why Chicago suffers from a gun violence problem.

The good news is that, while there are no simple or politically easy solutions, there are nonetheless viable avenues for addressing and combating the major factors driving this recent spike in gun violence.

To read more about these possible solutions, please see my full testimony to the committee here.

None of the strategies outlined therein provide particularly simple or quick solutions. They are not easily implemented overnight. They may be difficult to boil down into memorable slogans or pithy talking points. They may be far less appealing to constituents than the standard laments about having too many guns and too few gun laws.

But the right answers are not always the simple answers. These strategies are the right ones. They pull us back in the right direction, which in this case, means saving lives.