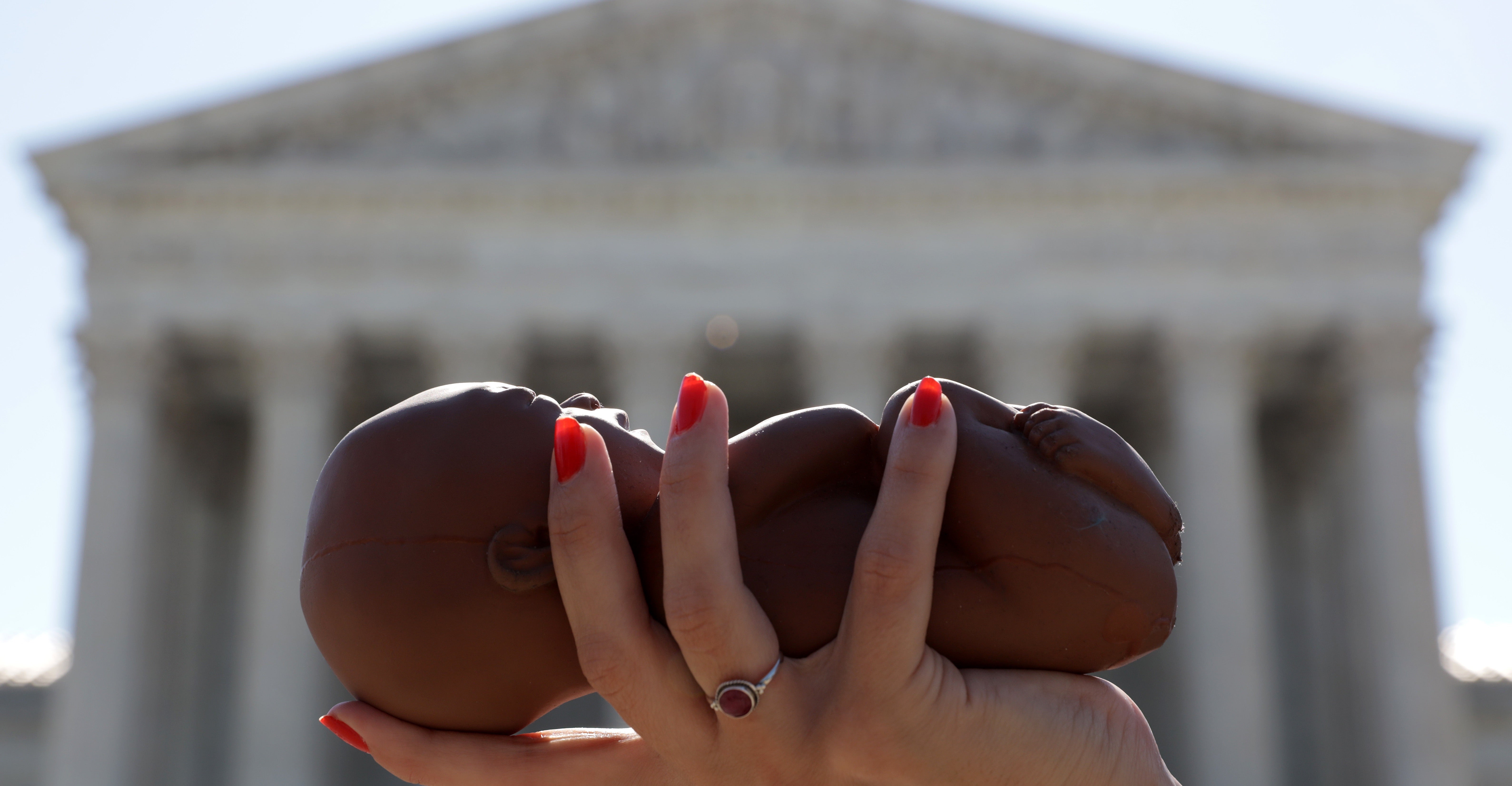 A pro-life activist displays a model of a fetus during a demonstration in front of the U.S. Supreme Court on June 29, 2020. (Photo: Alex Wong/Getty Images)

Pro-life leaders anxiously awaiting decisions in major abortion cases reacted Friday to news that the Supreme Court had dismissed one challenge to Texas’ ban on abortions after an unborn baby has a heartbeat.

“Today, the Supreme Court refused to strike down the lifesaving and democratically popular Texas heartbeat law,” said Live Action founder and President Lila Rose. “While the court did give a road map for lower courts to put the law on hold, the opinion of the court was crystal clear that this case was not commenting on the constitutionality of the abortion restriction itself.”

“The court’s decision also allows the law to stay in effect as litigation continues, an important victory for life,” she added.

The Supreme Court dismissed a challenge by the Biden administration to Texas’ heartbeat law, allowing the law to remain in effect—at least for the time being. The court is allowing Texas abortion providers’ challenge to the law to proceed.

“After being subjected to continuous intimidation and fearmongering from the left, the court’s five constitutionalists showed an unwavering commitment to applying the law to the facts before them, and an unwillingness to expand Article III standing, as they were asked to do,” said Judicial Crisis Network President Carrie Severino.

Severino called it “refreshing to see the court rightly address procedural questions about [Senate Bill 8] and its jurisdiction as such,” asking: “Could the days of the court’s ‘abortion distortion’ jurisprudence finally be behind us?”

The heartbeat law, or SB 8, has particularly angered pro-abortion media, activists, and lawmakers, as it allows private citizens to sue anyone who “knowingly engages in conduct that aids or abets the performance or inducement of an abortion.”

“With the Supreme Court’s decision to allow Texas’ Heartbeat Act to remain in effect while litigation continues, thousands of babies’ lives will continue to be saved, and thousands of mothers will continue to be protected from the abortion industry in the state of Texas,” said Heritage Action for America Executive Director Jessica Anderson. “This is a win for life as we prepare for a ruling in the Dobbs case. It’s time for [Roe v. Wade] to go.”

Dannenfelser noted that in Dobbs v. Jackson Women’s Health Organization, a separate case out of Mississippi, the court is “directly considering the constitutionality of laws that protect unborn children and mothers prior to viability.”

“Dobbs presents the biggest opportunity in generations to modernize our laws,” she said. “We have great hope that the court will return the issue back to the people to decide through their elected representatives, letting democracy and consensus prevail.”

March for Life President Jeanne Mancini pointed out that the court merely ruled on a procedural issue in the Texas abortion case, without “addressing the merits of the case challenging the Texas Heartbeat Act.”

“The Texas law came about because, for decades, Roe has blocked states from being able to regulate abortion, a right the Constitution gives to the people through their elected representatives,” Mancini said. “We hope, in the upcoming Dobbs case, the court returns this right to the people.”

The Supreme Court heard arguments last week in Dobbs, a case involving a 2018 Mississippi law banning most abortions after 15 weeks. Known as the Gestational Age Act, the law was blocked by a federal appellate court after abortion proponents challenged it on behalf of Mississippi’s last remaining abortion clinic.

Dobbs is perhaps the most pivotal abortion case in recent history as it directly challenges Roe v. Wade, the Supreme Court’s 1973 decision legalizing abortion nationwide. The case addresses whether bans on abortion prior to fetal viability are constitutional.

“The court’s dismissal of [the Justice Department’s] suit as improvidently granted further illustrates what has become increasingly clear,” said Severino. “[Attorney General] Merrick Garland is not the moderate he was presented to be when he was nominated, and runs a department that has been radically politicized.”

The Judicial Crisis Network president said that litigation regarding the Texas abortion law will continue in both Texas state court and in federal court.

“It’s a reminder of the chaos that Roe and [Planned Parenthood v. Casey] created, and the importance that those precedents be overturned,” she said.