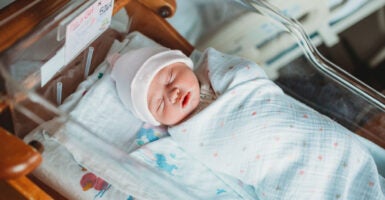 The Justice Department is suing Texas over its law prohibiting abortions after a fetal heartbeat can be detected via ultrasound, which occurs at about six weeks. (Photo illustration: Cavan Images/Getty Images)

“The Department of Justice has a duty to defend the Constitution of the United States and to uphold the rule of law,” Garland said. “Today we fulfill that duty by filing the lawsuit I have just described.”

The move could spark even more outrage and controversy over Texas’ new law, particularly ahead of Dobbs v. Jackson Women’s Health Organization, an abortion case the Supreme Court is scheduled to hear soon.

The case will be one of the first major abortion cases in which all three of former President Donald Trump’s Supreme Court justice appointees participate, including Justice Amy Coney Barrett.

“Biden Democrats’ anti-life, anti-democracy attack on Texas and other pro-life states proves how out of touch they are with the American people,” Susan B. Anthony List President Marjorie Dannenfelser said in a Thursday statement.

“The Texas Heartbeat Act is a response to fifty years of Supreme Court interference in states’ legitimate interest in protecting life and their right to debate and pass laws reflecting their people’s values,” she continued. “Biden, [House Speaker Nancy] Pelosi and their radical allies want to permanently stifle that debate and impose abortion on demand up until the moment of birth, paid for by taxpayers.”

Last week, the Supreme Court ruled 5-4 to deny abortion providers’ requests to block Texas’ Heartbeat Act. The president weighed in on the ruling Sept. 2, calling it an “unprecedented assault on a woman’s constitutional rights under Roe v. Wade.”

“By allowing a law to go into effect that empowers private citizens in Texas to sue health care providers, family members supporting a woman exercising her right to choose after six weeks, or even a friend who drives her to a hospital or clinic, it unleashes unconstitutional chaos and empowers self-anointed enforcers to have devastating impacts,” Biden said in a prepared statement.

Complete strangers will now be empowered to inject themselves in the most private and personal health decisions faced by women. This law is so extreme it does not even allow for exceptions in the case of rape or incest. And it not only empowers complete strangers to inject themselves into the most private of decisions made by a woman—it actually incentivizes them to do so with the prospect of $10,000 if they win their case.

The new law has particularly angered abortion advocates as it allows “any person” to sue doctors, abortion clinics, or anyone who “knowingly engages in conduct that aids or abets the performance or inducement of an abortion.”

The White House did not immediately respond to a request for comment from The Daily Caller News Foundation.