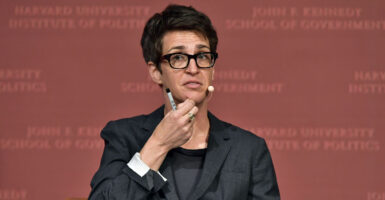 MSNBC host Rachel Maddow, pictured, and the left very eagerly find a "liberty interest" in the Constitution for the premature death of the unwanted "fetus," for their lust to "terminate a pregnancy." Pictured: (Photo: Paul Marotta/Getty Images)

Rachel Maddow is one of America’s most popular proponents of socialism. Government is never big enough for Maddow. Sen. Bernie Sanders has a friend in Maddow.

But when the subject is abortion, you will not find a more enthusiastic libertarian.

After the Supreme Court heard oral arguments on Nov. 30 on Mississippi’s law banning the termination of unborn children after 15 weeks, Maddow championed lawyer Julie Rikelman for the Center for Reproductive Rights for arguing this is “about American women being forced by the government to give birth against their will.”

She added, “This is what the supposed small-government conservative movement has brought us, right?”

This MSNBC host has one central issue when overweening government can be demonized. She has one issue where, suddenly, precedents must never be overturned, where she claims judges are acting like legislators and that Justice Brett Kavanaugh now represents “a little mini-Congress with robes on.”

The left very eagerly finds a “liberty interest” in the Constitution for the premature death of the unwanted “fetus,” for its lust to “terminate a pregnancy.”

In general, it finds “liberty” arguments in American courts or legislatures to be incredibly cynical capitalist excuses. But not when it comes to enjoying sex without consequences. Any woman who can’t get an abortion after 15 weeks is now victimized and “devastated.”

Maddow touted the headline in a Washington Post staff editorial: “Gutting Roe would devastate millions of Americans and the court itself.” Using the word “gutting” to describe the people procuring the literal evisceration of the most vulnerable human beings is pretty sick stuff.

But the Post couldn’t stop ignoring the fetus in its editorializing. It concluded any “gutting” of the Roe v. Wade precedent would result in “deep and immediate harm to millions.”

Nowhere in the Maddow/Post moral calculus of immediate harm are the tens of millions of unborn children who have been gutted and devastated and poured into dumpsters and sewers since the court decided Roe in 1973.

There is only a right to choose, and never a life to lose. They celebrate something called “International Safe Abortion Day.” They’ve poked their own eyes out and called themselves the visionaries.

The legitimacy of the court is now endangered, they argue, as if legitimacy and libertinism are linked. Maddow touted the liberal justices saying, “Hey, if you do this, this will be the end of the court as we know it.”

Maddow spoke next to a graphic of capitalized letters quoting Justice Stephen Breyer about the court looking like politicians: “THAT’S WHAT KILLS US AS AN AMERICAN INSTITUTION.” Right above those words on screen is a poster claiming “Abortion Is Essential.”

But saying that “many people think” overturning Roe ruins the public standing of the Supreme Court is … politics. Nobody should pretend that “The Rachel Maddow Show” isn’t a soapbox for politics.

The “credibility crisis” should be assigned to the liberal media, which only speaks of credibility and legitimacy and landmark decisions when it wins.