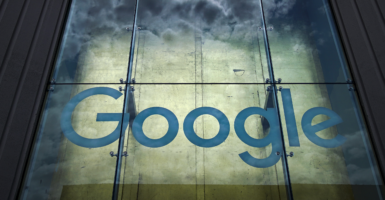 “We are deeply disappointed that you have not reversed Google’s unjust decision to censor life-saving information on abortion pill reversal,” wrote Sen. Steve Daines of Montana, Rep. Doug Lamborn of Colorado, and Rep. Jim Banks of Indiana in a letter first obtained by The Daily Signal.

“We had hoped to receive assurances of Google’s commitment to uphold the fundamental principle of freedom of speech and follow the science,” the Republicans wrote. “Unfortunately, Google’s response only increases our alarm.”

“Google must end its politically-motivated censorship and discrimination against pro-life and conservative voices,” Daines said in a statement to The Daily Signal.

“Big Tech has enormous influence, and Google most of all,” said Banks. “Google is abusing that power and disregarding scientific fact to stop women from accessing medicine that would save their unborn child.”

In September, Google blocked the pro-life organization’s ad about the Abortion Pill Reversal hotline, saying at the time that it does not permit ads “with unproven medical claims” and that “medical experts have raised serious concerns about abortion reversal pills.”

In defending its censorship, Google cited an advocacy post from the American College of Obstetricians and Gynecologists claiming abortion reversal pills are not backed up by science.

The platform also temporarily censored Live Action’s “Baby Olivia” ad, an animated portrayal of an unborn baby’s conception and growth, in September before restoring the ad.

Google had previously approved Live Action’s abortion pill reversal ads, which Rose said in a September tweet had been running for over four months. The pro-life organization had spent “over $170,000 and direct[ed] hundreds of moms to the Abortion Pill Reversal hotline,” Rose said.

Republican Missouri Sen. Josh Hawley sent a Sept. 15 letter to the platform calling on Google to explain its censorship and accusing Google of “targeting pregnancy resource centers and pro-life activist organizations for disfavor.”

Banks also led Republicans in sending a Sept. 23 letter to Google asserting that Google’s “pro-life censorship is out of step with the science and reflects an unacceptable bias against pro-life views.” The letter asked that Google immediately reverse the decision.

Google’s vice president of government affairs and public policy, Mark Isakowitz, responded to the lawmakers in an Oct. 15 letter highlighting that Google’s policies do not permit ads with “harmful health claims.”

“Under our misrepresentation policy, we do not allow unreliable claims, including making inaccurate claims or claims that entice the user with an improbable result (even if this result is possible) as the likely outcome a user can expect,” Isakowitz wrote.

“In this case,” he added, “the American College of Obstetricians and Gynecologists concluded that abortion reversal treatments ‘are not based on science and do not meet clinical standards.’”

In their Tuesday letter, the Republicans point out that Google’s “only evidence” of Live Action citing unreliable health information is “one statement from the pro-abortion American College of Obstetricians and Gynecologists (ACOG), which says [abortion pill reversal] is ‘not based on science.’”

“ACOG’s statement is simply false, and Google’s repetition of this pro-abortion organization’s false claim seriously calls into question its commitment to ‘work without political bias,’” the Republicans wrote.

“Google is still wrongfully censoring content from Live Action,” Lamborn said in a statement Tuesday. “While catering to pro-abortion groups like Planned Parenthood, they continue to crack down on pro-life content.”

“I am deeply concerned with their actions, and future impacts censorship will have on the conservative movement,” he added.

The GOP lawmakers reiterated the questions they previously raised in their September letter to Google, including whether “prior to removing Live Action’s ads, Google communicated with pro-abortion organizations” such as Planned Parenthood.

“We also still wish to know if any consideration was given to members of the scientific and medical communities who do not share ACOG’s pro-abortion position,” the Republicans wrote.

“Google’s decision to censor Live Action’s abortion pill reversal ads is denying life-saving information to thousands of women who want to save their unborn children’s lives from a tragic decision they regret,” they continued. “We urge you to swiftly reverse this unjust and indefensible decision.”