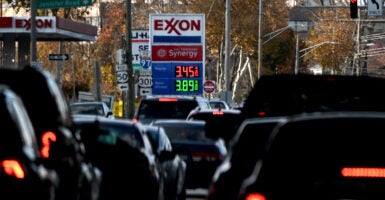 With gas prices surging—as seen here in Annapolis, Maryland, on Nov. 23—President Joe Biden has drawn on the seldom-used Strategic Petroleum Reserve in a bid to counteract the most obvious consequences of his anti-energy policies. (Photo: Jim Watson/AFP/ Getty Images)

While President Joe Biden seems to have no qualms about advancing regulations and policies that will increase energy prices for Americans, he clearly does not like the flak he’s getting right now for high gas prices and energy bills.

Feeling heat from rising gasoline prices, Biden authorized two releases totaling 50 million barrels of oil from the Strategic Petroleum Reserve to be delivered between the end of December through April 2022.

The Strategic Petroleum Reserve was created by Congress in the Energy Policy and Conservation Act of 1975 to meet the requirements for being a member of the International Energy Agency, itself an effort to coordinate responses by member nations to the 1973-1974 oil embargo by OPEC nations.

The 30 member nations must hold reserves of crude oil and/or petroleum products covering 90 days of net imports. U.S. net imports of crude oil have fallen steadily as American production has soared since the inception of cost-effective hydraulic fracturing.

Since 2019, the U.S. has even had moments of being a net exporter of oil and petroleum products, and there are routinely several hundred million barrels of oil in commercial inventories.

The Strategic Petroleum Reserve currently holds 604.5 million barrels of oil, and Congress has occasionally authorized sales as a gimmicky way to help “pay for” costly legislation, as it did in the $1.2 trillion infrastructure bill Congress just passed.

To release reserves from the Strategic Petroleum Reserve independent of direction from Congress, the Energy Policy and Conservation Act requires a presidential finding that there is a “severe energy supply interruption” and that:

For example, the Biden administration authorized an emergency exchange of 3.5 million barrels of oil (as opposed to a sale) from the Strategic Petroleum Reserve to refineries in Louisiana in response to Hurricane Ida.

The Department of Energy also sold 7.1 million barrels of oil from the Strategic Petroleum Reserve in October and an additional 6.1 million barrels in November as required by Congress, which reportedly were sold to Asian markets.

As Sen. Lisa Murkowski, R-Alaska, said last week, the Strategic Petroleum Reserve  is not about political relief and is not an “easy button” out; the issue at hand is about America’s ability to produce and transport energy.

Gasoline prices today are higher than they’ve been since September 2014.  Some 90% of Americans’ transportation fuel need is met by oil. Oil is a globally traded commodity, such that Americans cannot totally insulate themselves from price increases.

Importantly, prices communicate a wealth of information to oil producers, their customers, and innovators.

While there is only so much a president can do to override market forces, what Biden has done is worse than nothing.

Rather than relieve regulatory roadblocks to affordable energy—such as lifting the Jones Act and the ethanol mandate—Biden has used his bully pulpit from Day One to vilify the oil industry. He has aggressively deployed regulators across the executive branch to make it more difficult to explore for and produce oil, construct and operate pipelines, access financing and private sector investment, and use gasoline in cars and trucks.

Biden made a political example of the Keystone XL pipeline and has so far failed to show leadership (as his counterpart in Canada has done) to defend existing pipeline infrastructure serving American families in the Midwest.

Unsurprisingly, when asked recently by Sen. James  Lankford, R-Okla., why American oil production hasn’t yet caught up to demand, the Energy Information Administration acting administrator’s answer included that American producers were “trying to reposition for the long term”—despite the administration’s projections that American customers will continue using oil for decades to come.

Further, Biden continues to tout his so-called Build Back Better bill, which would increase oil prices by adding new fees and regulations on oil producers and cutting access to oil off American coasts.

When Biden finds Americans are upset with high gasoline prices, he has looked for harmful shortcuts like a release from the Strategic Petroleum Reserve and shifted blame to American oil companies.

This administration is either unwilling or unable to see that the policies it is pushing put it in direct conflict with the interests of the American people for affordable, reliable energy.