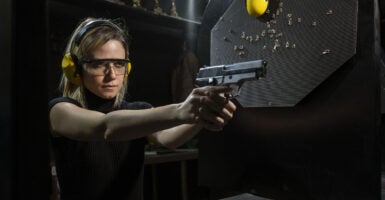 A woman in Marcola, Oregon, shot and wounded a man Oct. 5 after he strangled her and attempted to hit her with a baseball bat, police said. (Photo illustration: Vesnaandjic/Getty Images)

Underwood explained that this was a perfectly reasonable display of discretion, as residents in more densely populated urban areas enjoy a greater police presence than those in less-densely populated rural areas.

Roberts is correct: The Second Amendment is premised on the natural right of self-defense, the need for which is greatest where the risk of crime is highest.

And Americans routinely use guns to defend themselves successfully from crime.

Almost every major study on the issue has found that Americans use their firearms in self-defense between 500,000 and 3 million times annually, according to a 2013 report by the Centers for Disease Control and Prevention.

For this reason, The Daily Signal each month publishes an article highlighting some of the previous month’s many news stories on defensive gun use that you may have missed—or that might not have made it to the national spotlight in the first place. (Read other accounts here from 2019, 2020, and so far this year.)

The reality is that, despite the best efforts of law enforcement, Americans often are left as their own first and best defense against those who would harm them.

Urban New Yorkers living in high-crime areas are not rendered any safer just because more law enforcement officers hypothetically are available to show up after a crime has been committed against them.

They are rendered safer when they and other ordinary, law-abiding citizens are allowed to defend themselves and others—whether in their own homes or in public, in secluded areas or crowded shopping malls.

It’s time for New York to move away from onerous, arbitrary restrictions on Americans’ fundamental right to bear arms for self-defense, and finally allow all law-abiding residents the option of exercising it.