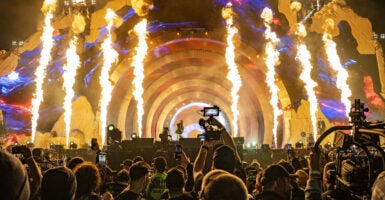 At the Astroworld concert in Houston, Texas, at least eight lives were lost and more than 100 were injured. Pictured: Travis Scott performs at Astroworld at NRG Park on Nov. 5 in Houston. (Photo: Erika Goldring/WireImage/Getty Images)

It pains me to see the sinfulness and moral treachery of our youth in America today. A notable example of this was during the Astroworld concert in Houston, Texas, which brought to light just how low our nation has fallen.

At least eight lives were tragically lost, with over 100 injured. All in the name of worshipping celebrities as if they are deities. Where has our faith gone?

Famed rapper Travis Scott hosted his notorious Astroworld event in Houston amid the jubilation of tens of thousands of fans. They flocked to Texas to walk through the massive gaping mouth of Scott that brought them into Scott’s concert, or as they may call it, the promised land.

Shortly after the event started, the bloodbath began. Thousands rushed through the gates for a front-row view of Scott in action. In the process, people were trampled and killed. What is so sad is that these people must have felt human bodies underneath them as they sprinted toward the stage, yet they cared so little to stop and help.

What is worse is that there are reports of a mysterious man who was injecting concertgoers and security with unknown substances. Yes, a man reportedly walked around with a syringe and was sticking people with drugs or poison. Quickly, the fans started falling dead.

There are horrifying and creepy videos of Scott “floating” over fans on a prop while you see dead fans being pulled out of the crowd. Of course, that did not stop many from dancing their minds away.

Only after extended calls for Scott to stop the show did it finally end. That was not before his staff and many security personnel pushed to keep the show going. It is sickening to think about. It will be seen whether Scott and those close to him will face criminal prosecution for their actions or lack thereof.

The terrible events in Texas are just the tip of the iceberg of a disturbing trend in this country, and in many ways, the Western world at large. The obsession with brands, labels and celebrities has crossed the line from mere fandom and is now nothing less than idol worship.

One of the Ten Commandments—to not worship idols—is being practiced by millions of Americans today. These worshippers bow down to their saviors who take the form of rappers like Scott and brands like Louis Vuitton. The inflated media culture and false worth of “likes” on social media has driven this generation mad.

Think about this for a second: Who were your heroes growing up? Maybe it was your parents, a distinguished political figure or an all-star athlete.

In short, the heroes of the past were those who lived long, fruitful lives, who overcame adversity and, in the face of that struggle, succeeded. They lived by example, and in turn, we sought to live by their example.

Who are the heroes of today? People like the Kardashians, who have gained fame by posting provocative photos on social media and flaunting their jet-setting lifestyle on Instagram. Kids today idolize Lil Nas X, who infamously posted a music video depicting sexual acts with the devil.

Our nation is following in the footsteps of the destroyed cities of Sodom and Gomorrah. These depraved cities were famously destroyed by God in the biblical narrative of Genesis.

Whether you believe the story actually happened or not does not discount the powerful lesson of the narrative: A society will destroy itself if it is grounded in immoral and corrupt behavior.

In truth, this idea should be common sense. How can a society survive like that? If all people do is value sinful behavior, material goods and instant gratification, its pitfalls will eventually catch up to itself.

We must ask ourselves where we wish to see this country in 20 years. Do we want to be a blip in history, like many experiments in the past, or do we want to continue to be a shining light for peoples and nations to turn to in their best and worst moments? Our actions over the next few years will determine that fate.