US in Moral Decline 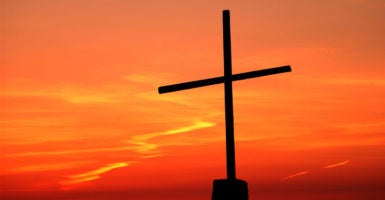 In 1798, John Adams, a leading Founding Father and our second president, said: "Our Constitution was made only for a moral and religious people. It is wholly inadequate to the government of any other." (Photo: David McNew/Getty Images)

Barr said that our moral decline is not random but “organized destruction.” Namely: “Secularists and their allies have marshaled all the forces of mass communication, popular culture, the entertainment industry, and academia in an unremitting assault on religion and traditional values.”

The attorney general is absolutely correct.

Whether we have the stomach to own up to it or not, we have become an immoral people left with little more than the pretense of morality. The left’s attack on religion is just the tiny tip of the iceberg in our nation’s moral decline.

You say: “That’s a pretty heavy charge, Williams. You’d better be prepared to back it up with evidence!”

I’ll try with a few questions for you to answer.

Do you believe that it is moral and just for one person to be forcibly used to serve the purposes of another? And, if that person does not peaceably submit to such use, do you believe that there should be the initiation of force against him?

Neither question is complex and can be answered by either a yes or no. For me, the answer is no to both questions. I bet that nearly every college professor, politician, or even minister could not give a simple yes or no response.

A no answer, translated to public policy, would slash the federal budget by no less than two-thirds to three-quarters. After all, most federal spending consists of taking the earnings of one American to give to another American in the form of farm subsidies, business bailouts, aid to higher education, welfare, and food stamps.

Keep in mind that Congress has no resources of its own. Plus there’s no Santa Claus or tooth fairy that gives Congress resources. Thus, the only way that Congress can give one American a dollar is first, through intimidation and coercion, to confiscate that dollar from some other American.

Such actions by the U.S. Congress should offend any sense of moral decency.

If you’re a Christian or a Jew, you should be against the notion of one American living at the expense of some other American. When God gave Moses the Eighth Commandment—”Thou shalt not steal”—I am sure that he did not mean thou shalt not steal unless there is a majority vote in the Congress.

We must own up to the fact that laws and regulations alone cannot produce a civilized society. Morality is society’s first line of defense against uncivilized behavior. Religious teachings, one way of inculcating morality, have been under siege in our country for well over a half a century.

In the name of not being judgmental and the vision that one lifestyle or set of values is just as good as another, traditional moral absolutes have been abandoned as guiding principles. We no longer hold people accountable for their behavior and we accept excuses.

The moral problems Barr mentioned in his speech—plus murder, mayhem, and other forms of anti-social behavior—will continue until we regain our moral footing.

In 1798, John Adams, a leading Founding Father and our second president, said: “Our Constitution was made only for a moral and religious people. It is wholly inadequate to the government of any other.”

I am all too afraid that a historian, writing a few hundred years from now, will note that the liberty America enjoyed was simply a historical curiosity. Then it all returned to mankind’s normal state of affairs—arbitrary abuse and control by the powerful elite.