No, Universal Pre-K, Child Care Subsidies Won’t Pay for Themselves 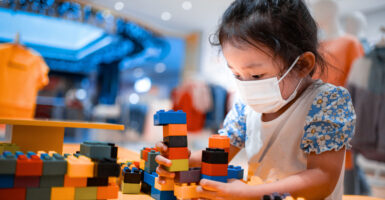 Evidence is scant in support of claims that the cost of universal pre-K and child care programs will be more than offset by the tax dollars paid by mothers who will then be able to join the formal labor force and who otherwise would not have. (Photo: Barleyman/Moment/ Getty Images)

As the two cars approach head-on in their game of profligate chicken, two early-childhood programs are secured in the passenger seats of both: universal, federally funded pre-K and massive new federal child care subsidies.

Proposed federal spending on these two early-childhood programs add up to $400 billion through 2028, a large chunk of the newest framework of the so-called Build Back Better legislative package released by the Biden administration totaling about $1.75 trillion.

The universal preschool provision would fund and regulate government-approved pre-K available for all 3- and 4-year-old children in states that apply for the funding. The child care subsidies cap the amount that families would pay at no more than 7% of their income on day care by giving families certificates to pay for government-approved providers.

While these policies are undesirable for all parents and children for many reasons, one of the arguments from those who favor universal pre-K and child care programs is that the costs will be more than offset by the tax dollars paid by mothers who will then be able to join the formal labor force and who otherwise would not have.

That argument is an empirical one, and it’s extremely dubious that enough mothers would join the labor force to cover the massive costs of universal pre-K and child care subsidies.

Many who champion this unfounded position cite as evidence the Quebec Family Policy, a highly subsidized universal child care program for all children under the age of 5 that began in 1997.

That program subsidized the cost of child care so that parents of all income levels and employment status only paid $5 per day for government-certified center- or home-based care.

A 2008 study that evaluated the Quebec Family Policy claims that the child care program caused an increase in the labor force participation of participating mothers with a young child that was 7.7 percentage points greater than the rest of Canada during the same time period.

While the authors of the study rightly proceed with caution in their interpretation, there’s still reason to think that number is overstated.

The finding is likely sensitive to the selection of a control group. For example, the eastern provinces of Canada, which are arguably more similar to Quebec than the rest of Canada, saw a greater increase in labor force participation among all females ages 25 to 44 without any policy.

Also of note, the 2008 study only analyzes mothers of two-parent households, not all mothers.

Even using the 7.7 percentage point estimate, the authors of the 2008 study concede that only “40 percent of the costs of the child care subsidy are covered by the income and payroll taxes on the extra labor the subsidy encourages.”

Other researchers studying the Quebec Family Policy agree that estimated increases in labor supply don’t come close to covering the costs of the program.

Looking to the broad body of research literature, estimates of the effects of subsidized child care and pre-K on maternal labor force participation vary quite a bit.

However, in recent years, those estimates seem to coalesce around the conclusion that there exists a positive impact on maternal labor force participation, but the magnitude of the effect is very small, certainly too small cover the costs of such programs.

While all this literature on the economic effects of preschool on maternal labor supply is informative, it isn’t the most important question we should ask about the proposed policy.

Families should have a wide variety of flexible child care options, and those choices shouldn’t be artificially expensive or inaccessible due to regulation and government subsidies.

Gallup polling shows that half of mothers with a child under the age of 18 would prefer to stay home with their children if they could. And 57% of families prefer for a parent or relative to be the main source of child care.

These new programs stack the deck against those preferred options.

Speaking of what parents want, families of about 1.5 million school-aged kids decided they want more control of K-12 education and less government interference in schooling.

The recent winning gubernatorial campaign of Republican Glenn Youngkin in Virginia pressed hard on the pain point parents have with their government-run schools. All of the evidence points to a desire for less government intervention in the lives of their children, not more.

Of course, any talk of child care programs should center around children. And the same 2008 Quebec study that government child care proponents tout for finding positive effects on the maternal labor force also finds significant negative health and behavioral outcomes for the participating children.

The notion that central planners have found a “free lunch” in child care and pre-K is not supported by the evidence. Universal pre-K and child care subsidies would be bad for children, families, and taxpayers.

The main beneficiary would be the teachers unions, who would have a steady new supply of union members, thanks to what would effectively amount to the K-12 system becoming a P3-12 system.