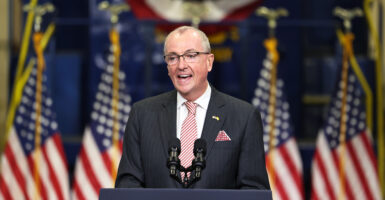 The New Jersey governor’s race between Gov. Phil Murphy, a Democrat fighting for a second term, and his Republican opponent Jack Ciattarelli was shockingly close in the early hours of Wednesday morning.

“When every vote is counted, and every vote will be counted, we hope to have a celebration,” Murphy said.

“Sometime real soon when it’s clear we have a quantifiable victory, we will begin to transform New Jersey and make this state a place everyone feels confident they can live, work, retire, start a business, and raise a family,” he said as the supporters chanted, “Jack, Jack, Jack.”

Murphy hoped to become the first Democrat in more than four decades to be reelected to the Garden State’s top office on Tuesday.

Through most of the campaign, Murphy maintained a double-digit lead. However, an Emerson College poll released in mid-October showed his lead had shrunk to just 6 points. A Rutgers/Eagleton poll on Monday showed Murphy with an 8-point lead. Few major polls showed the race was competitive.

The race drew some national firepower. President Joe Biden and former President Barack Obama separately stumped for Murphy, who served as Obama’s U.S. ambassador to Germany from 2009 to 2013. Republican National Committee Chairwoman Ronna McDaniel came to the state to campaign with Ciattarelli.

Former Gov. Brendan Byrne in 1977 was the last Democrat to win a second gubernatorial term in New Jersey. Since that time, the past three two-term New Jersey governors—Chris Christie, Christine Todd Whitman, and Tom Kean—have all been Republicans.

This was the first election since Murphy signed a bill allowing early in-person voting up to nine days before Election Day. Weekend numbers from the the Rebovich Institute for New Jersey Politics at Rider University showed 170,000 people voted early in person as of Saturday and 451,000 people had voted by mail as of Friday, CBS News reported. Democrats cast 59% of those votes.

Despite consistently having one of the highest COVID-19 death rates in the United States, Murphy said he “led New Jersey from being one of the hardest-hit states by COVID-19 to a national model in pandemic response.”

Both candidates were pro-abortion. Murphy campaigned on passing a law enshrining abortion rights into state law in case the Supreme Court overturns Roe v. Wade. Ciattarelli has said he wants abortion to remain legal but prohibited after 20 weeks of pregnancy.

The off-year election for governor has been part of the New Jersey Constitution since 1947 for the express purpose of not being influenced by national campaigns. Then-Gov. Alfred Driscoll, a Republican, said: “The importance of a gubernatorial election merits an election that will not be overshadowed by a national contest for the presidency. The problems confronting the state are frequently distinct from those confronting the nation.”