Why Is Defense Authorization Bill Languishing in Senate? 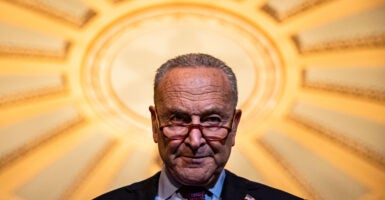 Senate Majority Leader Chuck Schumer, D-N.Y., seen here at a press conference at the Capitol on Oct. 26, controls the Senate agenda, so he presumably could bring the National Defense Authorization Act bill to the Senate floor any time he wanted to. (Photo: Samuel Corum/Getty Images)

The first 10 months of the Biden administration have brought us numerous indicators that national defense is not a priority for it—from a defense budget that fails to meet current challenges to continual expansion of nonmilitary tasks such as climate change and hitting diversity quotas to the debacle in Afghanistan.

Now, Senate Democrats—seemingly taking their cues from the president—are allowing legislation central to protecting the country to languish without action.

More than three months ago, the Senate Armed Services Committee passed its version of the National Defense Authorization Act by a wide, bipartisan margin of 23 to 3. Like most truly bipartisan bills, the act has its shortcomings and its bright spots, and hopefully in a conference between the House and Senate, the bill can be further polished.

There are problems with the proposed changes to the Uniform Code of Military Justice, women being included in the Selective Service, expansion of domestic violence restraining orders, and a few other issues. But none of that can proceed until the Senate acts.

Among the bright spots in the bill approved by the Senate Armed Services Committee are spending increases above what President Joe Biden proposed in his anemic budget request, which will provide an increased number of desperately needed Navy ships, such as a destroyer and an amphibious assault ship, and military vehicles such as the Joint Lightweight Tactical Vehicle and the Stryker Infantry Combat Vehicle.

Right now, the bill is collecting dust because the Senate leadership has chosen not to prioritize our national defense and its annual authorization. Rather, the Senate is embroiled in discussion about how to vastly expand the welfare state and how to take control of a larger share of the American economy.

The Senate’s lack of urgency with respect to national defense is made further evident by the work of the House Armed Services Committee.

Even though the House got a later start than the Senate, it raced ahead of the Senate, and the House bill was voted out of the House floor before the end of September. The bill received wide bipartisan approval, passing with 316 votes in favor and 113 against.

With the Senate’s delay in acting on the defense bill, they cannot start hammering out the differences.

They’re too busy debating how much socialism to unleash on the country to look out for our troops, our veterans, and our national security. This unseriousness will leave Americans less safe.

The chairman of the House Armed Services Committee, Rep. Adam Smith, D-Wash., also expressed his frustration, stating: “Let’s be clear: There is no reason why the Senate hasn’t moved the bill on the floor yet, but that does not stop us from doing our job.”

The Senate can and must do its job and pass the National Defense Authorization Act for a fiscal year that is already one month old. It would show that the Senate majority can perform basic governance tasks, by passing an annual bipartisan authorization bill.