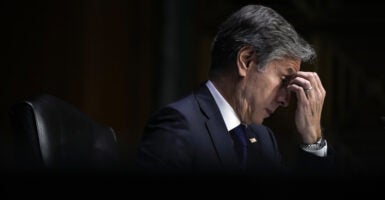 The State Department’s admission that three times as many Americans remain in Afghanistan as officials originally estimated marks the most recent controversy resulting from President Joe Biden’s hasty withdrawal of troops.

The botched pullout ending America’s longest war was punctuated early on with a terrorist bombing that killed 13 U.S. service members at the airport in the capital of Kabul.

Taliban militants overran cities throughout Afghanistan as the U.S. relinquished control of Bagram Air Base north of Kabul, leaving behind billions of dollars worth of weapons and other military equipment.

Here are four things to know about the situation in Afghanistan, and what the Biden administration told Americans then and now.

After the news Friday that the State Department had counted 363 Americans remaining in Afghanistan, Sen. Ben Sasse, R-Neb., a member of the Senate Select Committee on Intelligence, called the situation a “slow-motion hostage crisis.”

“The Biden administration has shamelessly and repeatedly lied about the number of Americans trapped behind Taliban lines,” Sasse said in a public statement.

Biden, Secretary of State Antony Blinken, and other administration officials had estimated that 100 to 200 Americans remained in Afghanistan after the Aug. 31 retreat.

“For weeks, their official number was ‘about a hundred’ and it magically never changed—as Americans slowly got out, the total number never went down,” Sasse said, adding:

Now they say more than 300 Americans are still in Afghanistan. The Biden administration lied to hide the consequences of the president’s morally indefensible decision to abandon our people in a war zone. This slow-motion hostage crisis and the administration’s cover-up are disgraceful. Mr. President, bring our people home.

Perhaps the most notable hostage crisis in U.S. history occurred when Iranian militants held 52 Americans hostage for more than a year at the U.S. Embassy in Tehran. That number is significantly fewer Americans than are estimated to be in Afghanistan now, but the Iran hostage crisis involved holding American diplomats and embassy personnel as prisoners in one location.

The circumstances in Afghanistan could turn into a hostage situation, said Jim Phillips, senior research fellow for Middle Eastern affairs at The Heritage Foundation, the parent organization of The Daily Signal.

That threat remains despite the fact that the Biden administration is considering unfreezing Taliban assets, he said.

Phillips added that if the leadership of the Taliban, considered to be a terrorist group, maintained discipline for financial purposes, splinter groups still could threaten Americans who remain in Afghanistan.

“What we long suspected is now confirmed: What the White House calls a historically successful airlift was in reality the worst-ever betrayal of American citizens in a foreign land,” Issa told Fox News. “So they lied about it from the beginning.”

On Aug. 31, Biden seemed to say there were no more than 200 Americans still in Afghanistan.

“Now we believe that about 100 to 200 Americans remain in Afghanistan with some intention to leave,” Biden said at the White House. “Most of those who remain are dual citizens, long-time residents who had earlier decided to stay because of their family roots in Afghanistan.”

Biden went on to say: “The bottom line: 90% of Americans in Afghanistan who wanted to leave were able to leave.”

The White House transcript of Biden’s Aug. 31 remarks attempt to say what Biden really meant, when it inserted a strike-through to make it: “Ninety [Ninety-eight] percent.”

One day earlier, Blinken estimated that the number of Americans remaining in Afghanistan was on the lower end of the range.

“We believe there are still a small number of Americans—under 200 and likely closer to 100—who remain in Afghanistan and want to leave. We’re trying to determine exactly how many,” Blinken said during a press briefing.

Biden’s secretary of state did concede that the number was difficult to determine.

“We’re going through manifests and calling and texting through our lists, and we’ll have more details to share as soon as possible,” Blinken said Aug. 30. “Part of the challenge with fixing a precise number is that there are long-time residents of Afghanistan who have American passports, and who were trying to determine whether or not they wanted to leave. Many are dual-citizen Americans with deep roots and extended families in Afghanistan, who have resided there for many years. For many, it’s a painful choice.”

However, Blinken said in an Aug. 25 press conference: “Based on our analysis, starting on Aug. 14, when our evacuation operations began, there was then a population of as many as 6,000 American citizens in Afghanistan who wanted to leave. Over the last 10 days, roughly 4,500 of these Americans have been safely evacuated along with immediate family members.”

On Sept. 1, State Department spokesman Ned Price said the 100-to-200 number didn’t include U.S. legal permanent residents in Afghanistan at the time.

“When it comes to the number, we have gone to some pains to explain how we arrived at the figure of approximately 6,000 when it comes to American citizens,” Price said, adding:

That is a figure where we have the greatest fidelity, again, because our first responsibility and our first commitment in all of this has been to American citizens and American passport holders. The number, when it comes to LPRs [legal permanent residents], is, of course, going to be larger. It is going to be a more—and it has been a more complex endeavor to determine with any specificity what that number may be. We’ve been able to refine it; we believe that we have effectively been able to message this universe of individuals, but we’re just not able at present to give you a firm figure as to how many LPRs may be in Afghanistan who wish to leave.

The State Department told congressional staff in a briefing last Thursday that the agency is in touch with 363 American citizens in Afghanistan, and at least 176 of them want to leave the country.

The State Department has said it was able to get 218 Americans and 131 legal permanent residents out of Afghanistan since the evacuation implemented before the Biden administration’s Aug. 31 deadline.

CNN first reported that administration officials briefed congressional staff with numbers that are significantly higher than what the administration first projected.

Price did not confirm the numbers Friday during a State Department briefing for reporters.

“That number is always changing. To give you an example, at one point that number was below 100,” Price said. “Right now, the number of Americans in that category is between approximately 100 to 200. That figure has risen in recent days as more Americans in Afghanistan have decided to depart in light of our successful facilitation of dozens of departures in recent weeks.”

Heritage’s Phillips said he wouldn’t be surprised if the U.S. determined that more Americans are in Afghanistan.

4. Investigating the Exit From Afghanistan

The State Department’s Office of Inspector General is investigating the planning behind the suspension of operations at the U.S. Embassy in Kabul. That probe will “include evacuation of U.S. citizens and Afghan nationals,” the IG’s office said in an Oct. 15 memo to Blinken.

Evacuation of Americans is especially complicated without U.S. diplomats in the country.

State’s Office of Inspector General reportedly will do a series of investigations. Beyond the emergency evacuation of the embassy in Kabul, the internal watchdog will examine how the department handled its Special Immigrant Visa program; how it processed Afghan refugees; and how it resettled those refugees and visa recipients in the U.S.

“Given the elevated interest in this work by Congress and the unique circumstances requiring coordination across the Inspector General community, I wanted to notify our committees of jurisdiction of this important work,” Diana Shaw, State’s acting inspector general, wrote in a letter to Blinken that was forwarded to the Senate Foreign Relations Committee and the House Foreign Affairs Committee.

Congress already has held hearings on the Afghanistan exit and oversight is expected to be broad.

Although Democrats control both the House and Senate, members of Biden’s own party have expressed frustration with how the State and Defense departments executed the evacuation.