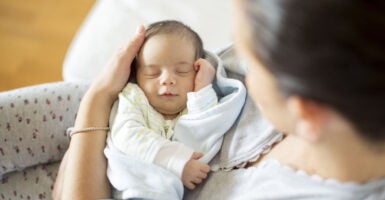 If Dr. Tlaleng Mofokeng, the United Nations’ special rapporteur on the right to health, was a real champion of women’s health, she would be raising concerns about abortion, not supporting it. (Photo: Thanasis Zovoilis/Getty Images)

The United Nation’s top health czar presented her debut report to the international assembly on Oct. 20. While the COVID-19 pandemic provides a point of departure for the presentation, the report’s real focus was abortion.

Dr. Tlaleng Mofokeng is the new U.N. special rapporteur on the right to physical and mental health. Her report focuses on the topic of women’s “sexual and reproductive health rights.”

Such reports from international officials may seem irrelevant to pro-life Americans, but in reality, they reinforce a self-referential body of soft law seeking to advance abortion—even when this activism comes at the expense of women’s health and lives.

Second, it claims that “states have clear legal obligations under current human rights standards to ensure respect for and protection and fulfilment of sexual and reproductive health rights.”

Third, it states that “safe and legal abortion is a necessary component of comprehensive health services.”

But insisting that U.N. member states have a legal obligation to fulfill their citizens’ alleged right to safe abortions flies in the face of common sense and international law.

The right to life is enshrined in international human rights law. It is also protected in the constitutions or domestic laws of many countries around the world.

Furthermore, there is no “right to abortion” in international law, as a significant number of U.N. member states reaffirmed in the Geneva Consensus Declaration last year.

Just this month, Guatemala became the latest country to join the Geneva Consensus Declaration, bravely helping to build a coalition of countries that resist the pro-abortion activists at the U.N. and work together to promote women’s health, life, and family.

As an institutional matter, the U.N. Charter requires the U.N. to respect nations’ sovereign right to make their own laws regarding abortion. Most of the U.N.’s 193 member states heavily restrict abortion or prohibit it entirely. The United States is an exception. Along with only six other countries, including China and North Korea, the U.S. permits elective abortion past 20 weeks.

These facts are no impediment to Mofokeng, who describes herself as “an activist at heart” for abortion.  That is just what she does in her report, which complemented the governments of Brazil, Ireland, and the United Kingdom in introducing telemedicine for abortion, as well as Argentina for its recent legalization of abortion.

But if Mofokeng was a real champion of women’s health, she would be raising serious concerns about this practice. The COVID-19 pandemic has led to significant promotion of chemical or “medical” abortion, threatening women’s health in dramatic ways.

Pro-abortion actors in the U.S. and abroad have been working to weaken existing restrictions on chemical abortion pills and to promote telemedicine and mail-order pills under the guise of pandemic-related concerns.

This is leading to more women undergoing this dangerous process at home, away from medical supervision and support.

The consequences for women of self-administering mifepristone and misoprostol can be devastating, especially in the developing world.

Mofokeng’s report, concerning because of its unabashed promotion of abortion, is even more dangerous in further perpetuating the falsehood that abortion is a human right.

The U.N. human rights mechanisms routinely promote their own recommendations and cite each other’s opinions as authoritative, building up a body of soft law that contradicts the text of the treaty that member states negotiated and adopted.

It’s simply a case of repeating something enough times to make people believe that it’s true. Too often, it works.

The U.N.’s Office of the High Commissioner for Human Rights boldly stated, “Human rights bodies have provided clear guidance on the need to decriminalize abortion.”

In fact, the U.N.’s human rights apparatus has found or created a right to abortion within the rights to health, privacy, and even in the right to be free from cruel, inhumane, and degrading treatment. That’s a far cry from respecting states’ sovereignty in regulating abortion.

In the face of such aggressive and ultra vires action by the U.N. to promote abortion at all costs, representatives of more member states must raise their voices in defense of women’s health and the rights of unborn children.