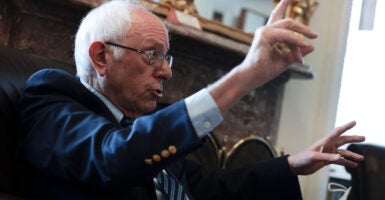 Moderate and left-wing congressional Democrats continue to wrangle over the details of their partisan $3.5 trillion tax-and-spend bill, but there’s one thing they agree on: As much as 17% of the new spending will go to profitable health insurance companies.

The 133 House and Senate Democrats who have co-sponsored “Medicare for All,” which would abolish private health insurance companies, seem to be just fine with that, continuing an alliance between liberals and the health insurance industry that has been around since Obamacare’s creation.

The left-wing lawmakers voted last winter in favor of President Joe Biden’s proposed temporary increase in federal payments to insurance companies. Soon, they will vote on legislation to make those subsidy increases permanent, create a new $10 billion-per-year program for insurance companies, and establish a new federal Medicaid program that directs the secretary of the Department of Health and Human Services to contract with profitable HMOs.

The 17% estimate is admittedly rough. The Congressional Budget Office has not prepared an estimate of the tax-and-spend bill that the House Budget Committee favorably reported last month.

The news media have taken the Biden administration’s $3.5 trillion price tag for the measure at face value, even though independent analysts suggest it could cost between $5 trillion and $5.5 trillion. Congressional Democrats are poring over a menu of budget gimmicks to trim the top-line number to facilitate a deal between moderate and liberal factions.

Brian Blase of the Galen Institute has estimated the costs of the current bill’s increased payments to insurance companies at $600 billion, which would represent 17% of the measure’s advertised $3.5 trillion price tag.

Expanded premium subsidies enacted earlier this year are mainly paid on behalf of people with existing coverage, including the wealthiest households. This additional spending does little to expand coverage to the uninsured.

While the government pays premium subsidies on behalf of individuals who qualify for them, it pays Affordable Care Act (aka Obamacare) premium subsidies directly to insurance companies. According to data supplied by the Centers for Medicare and Medicaid Services, the government accounted for 74% of premium revenue for insurers selling through the exchanges during 2020.

That was before the premium subsidy expansions, which shifted more of the premium burden to federal taxpayers. The increased federal subsidies expire in December 2022. The bill would make them permanent.

The tax-and-spend bill also would establish a new and permanent federal entitlement for insurance companies that sell Obamacare policies. The program, priced at $10 billion per year, would allow those companies to shift the costs of the biggest medical claims to taxpayers.

The program is unnecessary. The government already allows states to redirect a portion of existing Affordable Care Act premium subsidies to risk-mitigation programs.

A state must assure that its program is budget-neutral to the federal government. The 16 states that have received Centers for Medicare and Medicaid Services approval to run these programs have generally achieved substantial reductions in premiums for Affordable Care Act policies without any additional cost to taxpayers.

Since 2014, states have had the option of expanding their Medicaid programs to cover non-aged, non-disabled adults with incomes below the federal poverty line. While most states have expanded their programs, 12 have not. The tax-and-spend bill would establish a new federally financed Medicaid program in those states.

Under the new program, the federal government would contract with managed care organizations to provide Medicaid benefits for able-bodied adults.

All three of these programs either enlarge or create new government spending that will further boost insurance company revenues and profits.

Existing subsidies already do that. During the second quarter of this year, insurers ran larger margins on their government-subsidized Obamacare policies than on employer-based coverage.

Without those taxpayer subsidies, insurers wouldn’t sell many Obamacare policies. Very few people are willing to pay the entire premium for coverage that has high deductibles, burdensome cost-sharing, and few participating doctors and hospitals.

The same is true of Medicaid, which government-contracted private insurance companies generally provide.

Medicaid HMOs collected $128 billion in payments from taxpayers during the second quarter of this year and ran gross margins of $17 billion. In 2020, five corporations controlled nearly half of the Medicaid market share. The largest, Centene, reported $111 billion in 2020 revenues, up 49% over 2019, and $1.8 billion in profits, up 38% over 2019.

Only one booked less than $10 million in compensation. The CEO of Independence Blue Cross, a not-for-profit corporation that collected $21.8 billion in revenues in 2020 and holds $3.9 billion in surplus cash, made just $9,926,271 last year.

All of these corporations—and their executives—will benefit from the $600 billion in new federal payments to the insurance industry.

In a reformed health care system, consumers—including those with low incomes—would have choices among a broad range of affordable health care options, regardless of their income or medical condition. Real reform would concentrate power in the hands of patients, working with their doctors, not bureaucracies and C-suites, and would reform Obamacare’s problematic and inflationary subsidy structure.

The medical industry has consistently partnered with liberals on the Affordable Care Act. The industry embraced Obamacare’s creation and, except for the pharmaceutical sector, opposed its repeal, endorsed temporary subsidy expansions, and now backs enlarging them and making them permanent.

Left-wing lawmakers are effectively the allies of big insurance.

Sen. Bernie Sanders, I-Vt., and like-minded Democratic members of Congress malign the health insurance industry on their Twitter feeds. But when it comes time to vote, it’s a good bet they will once again side with the industry they have vowed to destroy.