A Look Back at Trump’s Health Care Reforms 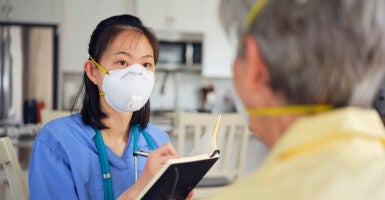 The 2016 election produced a president and congressional majority committed to repealing and replacing Obamacare. Those efforts faltered during the summer of 2017.

In December of that year, Congress did enact a tax reform bill that eliminated the tax penalty on the uninsured. That change, effective January 2019, meant that Americans who were priced out of the individual health insurance market by Obamacare would no longer face IRS penalties. Aside from this measure of relief, however, Congress chose to leave Obamacare largely intact.

Some in both political parties favored doubling down on the law, seeking tens of billions in additional federal “bailout” payments to insurers that sell through health care exchanges. These payments would have taken the form of richer premium subsidies and a new federally financed “reinsurance” program.

Conservatives blocked this expansion of the federal role in health care by demonstrating that through regulatory relief, states could lower health care premiums, protect the poor and sick, and stabilize private markets—all without spending a single new federal taxpayer dime.

Faced with congressional stalemate, the Trump administration used its regulatory authority to provide relief to individuals and small businesses burdened by Obamacare’s high costs and limited choices. It also invited states to apply for waivers from some of the law’s more onerous requirements and attacked rising health care costs through a series of proposals to increase choice, competition, and price transparency.

In August 2018, the U.S. Department of Health and Human Services finalized regulations on short-term, limited-duration plans. These policies had been exempt from federal Obamacare regulations that prevent medical underwriting, require modified community rating, and force insurers to cover treatment of medical conditions that an applicant acquired before being insured.

As a result, premiums for short-term, limited-duration plans average less than one-third of those for Obamacare policies. Despite claims by the left that this is “junk insurance,” research shows that these plans offer coverage that is comparable in scope to other individual and employer plans and have the potential to offer coverage that is better than Obamacare.

Weeks before leaving office, the Obama administration put into effect a rule that limited these plans to 90 days and stripped consumers of the right to renew their coverage. The Trump administration rule restored the prior 364-day standard and allowed the coverage to be renewable up to 36 months. It also permitted the sale of separate contracts that would allow consumers to renew the plans without being medically underwritten.

A Democrat-led House later passed a bill to repeal that rule, but as this volume is being written, the Senate has not considered this legislation.

The Trump administration also took steps to make coverage more affordable for small businesses. Since the enactment of Obamacare, fewer and fewer small firms have sponsored insurance for their workers. As with individual health coverage, Obamacare regulations have made small-group policies for companies with fewer than 50 employees less affordable.

The Trump administration published a new rule on association health plans, which allow small firms to band together to purchase coverage. The rule allows groups to form within a state or multi-state metropolitan area (for example, through chambers of commerce) and companies like restaurants that are in the same trade or business to form national associations. These plans are treated as large businesses for federal regulatory purposes.

Obamacare rules are less stringent for large firms than they are for small ones. In the early months of implementation in late 2018, these associations achieved double-digit premium savings for their members while providing generous coverage. A federal judge enjoined enforcement of the regulation in March 2019, putting the future of association health plans in doubt.

The Trump administration has made a potentially revolutionary change in employment-based coverage with its final rule on health reimbursement arrangements. The rule allows employers to establish accounts that their workers can use to purchase individual health insurance policies.

These health reimbursement arrangement accounts offer a number of advantages over traditional employment-based health insurance arrangements for both companies and workers.

The Trump administration moved to allow states to make innovative reforms as well. Section 1332 of the Obamacare statute permits states to obtain waivers from some of the law’s restrictions.

The administration approved waiver requests from several states that allowed them to divert money that otherwise would have been spent on premium subsidies into risk-mitigation arrangements designed to finance care for those who are in greatest medical need. States that obtained these waivers reduced premiums for individual coverage at no cost to the federal government.

In 2019, these reforms resulted in the first-ever national decline in average premiums for Obamacare benchmark plans. This decline was driven by the seven waiver states, where premiums fell by a median of 7.5%.

Premiums rose by a median of 3.1% in the 44 states and the District of Columbia that did not obtain waivers, and an additional five states are seeking waivers in 2020. Premiums are estimated to fall by 5.9% to 19.8% in these states.

Obamacare fundamentally changed the Medicaid program by allowing states to add non-disabled, non-aged adults to their Medicaid rolls. The law also favored these “expansion adults” over such traditional populations as the elderly, people with disabilities, children, and pregnant women.

Whereas federal matching rates for those populations vary from 50% to 77%, depending on a state’s per capita income, the federal government picks up over 90% of the costs associated with able-bodied adults. That creates a perverse financial incentive for states to prioritize enrolling them over more vulnerable populations.

As of April 2019, the administration had approved waivers that allowed nine states to require “expansion adults” to work, seek a job, or pursue education and training to equip themselves for the labor force. Shortly thereafter, a federal judge invalidated waivers in two of these nine states.

The COVID-19 pandemic exposed the best and worst of our health care system. The private sector—especially hospitals and pharmaceutical companies—continued to provide Americans the best medical care in human history, even as hospitals accommodated a surge of critically ill patients.

Millions of patients benefited from telemedicine, which gave them the ability to see their doctors remotely without exposing themselves or others to the coronavirus.

Pharmaceutical companies were moving rapidly toward the development of a COVID-19 vaccine, building on decades of research and innovation that have produced treatments for diseases that once were death sentences.

Actions by the Trump administration contributed to these private sector successes. They allowed Medicare to pay for telemedicine visits, encouraged vaccine development by allowing clinical trials to move more quickly and by contracting to buy millions of doses of vaccines that won the U.S. Food and Drug Administration’s approval, and made use of emergency powers to allow more tests to come to market.

Many actions by federal public health agencies were, however, counterproductive. Those actions produced an inadequate and distorted understanding of the pandemic, particularly during its earliest stages.

The Centers for Disease Control and Prevention, for example, developed a defective test for the pathogen. The Food and Drug Administration compounded this error by refusing to allow more accurate alternative tests to come to market.

Although the Food and Drug Administration eventually reversed this decision, policymakers lacked the ability to detect the virus just as the pandemic was gaining force.

The Centers for Disease Control and Prevention’s antiquated system of data collection and dissemination also blinded policymakers to how quickly the virus was spreading. The agency ignored four legislative enactments dating back to 2006 ordering it to develop a modernized data system that could gather and publish critical data on a near-real-time basis.

This failure continues to deprive policymakers and front-line health care professions of the information they need to combat COVID-19.

In addition to a lack of information, the Centers for Disease Control and Prevention also provided policymakers with bad information.

Lacking actual real-time data, it turned to internal models to guide public policy. These models proved highly sensitive to assumptions about the pathogen’s transmissibility and lethality and offered wildly erroneous forecasts of hospitals being overrun by an influx of COVID-19 patients.

In its communications with the public, the Centers for Disease Control and Prevention also presented a distorted view of the risks posed by the pandemic. While the risk of infection is more or less evenly distributed, the risk of serious illness and death are strongly related to age.

According to the agency, while people over 65 account for less than 16% of COVID-19 cases, they account for 80% of deaths linked to the pathogen. Nearly half of all COVID-19-related deaths have occurred to nursing home residents.

The Centers for Disease Control and Prevention nevertheless supported widespread lockdowns of indefinite duration, treating people of all ages and life circumstances as though they were at equal risk of serious illness, while failing to protect the most vulnerable.

These failures of government agencies and successes of private actors (hospitals, doctors and nurses, pharmaceutical companies) illustrate the folly of enlarging the government’s role in health care.

Real health care reform will curtail the power of government over medical care and empower patients and doctors.