Is It OK for Activists to Corner Sen. Kyrsten Sinema in Restroom to Demand Her Vote? 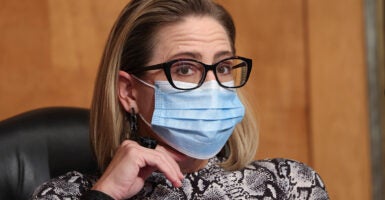 Video of the intruders lecturing Sinema, D-Ariz., from outside a closed stall door Sunday—while other women went about their personal business—quickly went viral.

“Yesterday’s behavior was not legitimate protest,” Sinema said in a public statement. “It is unacceptable for activist organizations to instruct their members to jeopardize themselves by engaging in unlawful activities such as gaining entry to closed university buildings, disrupting learning environments, and filming students in a restroom.”

The Constitution grants all Americans the right to peacefully protest and petition the government, but doing so inside a restroom and on camera leaves many raising concerns over lawmakers’ privacy.

After saying the ambush wasn’t appropriate, President Joe Biden seemed to excuse it in answering a reporter’s question Monday.

“I don’t think they’re appropriate tactics, but it happens to everybody,” Biden said. “The only people it doesn’t happen to are people who have Secret Service standing around them. So it’s part of the process.”

On today’s edition of the “Problematic Women” podcast, we’ve got what you need to know about Sinema’s interaction with the protesters as well as the status of the $3.5 trillion spending bill backed by Biden and most other congressional Democrats.

Also on today’s show, we discuss a viral TikTok video that raises concerns over the privacy of young people. Plus, over the weekend NASCAR fans joined a trend of obscene chants at sports events directed at the president. What does the situation tell us about today’s political climate?

We also explain the findings of a new study concluding that testosterone suppression isn’t enough to level the playing field between men and women. And as always, we crown our Problematic Woman of the Week.