Between Border Crisis and Afghanistan, Have We Ever Had a Less Competent President? 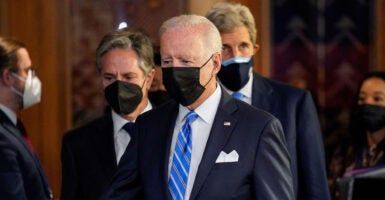 There’s always press coverage about Republican mismanagement or Republicans getting into trouble governing as ideologues, but you don’t hear much about the reverse.

There’s a lot to critique about Republicans, but for mismanagement and for blindly putting ideology above all else, President Joe Biden may be the all-time champ.

Biden campaigned as a pragmatist who could bring stability and national unification. His inaugural address was all about these themes. America needs some level of national healing more than anything else. Americans can’t go on at each other’s throats. The country is falling apart.

Biden deserved praise for starting his presidency with a message of healing. I did an entire column to compliment him for it.

Since taking office, however, Biden has not made any effort to back up his pledge. He has governed not just as a wild-eyed ideologue but as an incompetent one, too. America is paying the price.

If any Republican president tried to implement such an extremist agenda, the press would hammer it daily. The press likes Biden’s left-wing policies, so they downplay the radical nature of what we are going through and cover the incompetence with a light touch, if at all.

On Afghanistan, pretty much all of America wanted out. What most Americans wanted, though, was a safe exit that considered America’s long-term security needs.

Biden’s agenda was driven by the desire to have everything finished by the 20-year anniversary of 9/11. It’s hard to imagine that symbolism drove the entire agenda for such an important matter, but looking at the facts, that’s all you can conclude. Biden risked countless American lives and harmed long-term security, essentially for a photo op.

For very good reasons, they aren’t allowed to say it directly, but the clear message of the testimony is that the president is lying about what advice he received. Military leaders wanted to leave more troops behind to secure a safe exit.

Military leaders would have secured the Bagram Air Base we fought so hard to build up and defend. Of course they would have. Abandoning Bagram and having no one at all to keep track of the terrorists on the ground is moronic. But that’s just what the president ordered.

The second completely self-generated Biden crisis is immigration. As with many other issues, it’s now apparent that more than anything else, Biden’s goal was to undo what former President Donald Trump had done on immigration.

The dominant far-left activist wing of his party had campaigned on open borders. This is not a concept that sane people find comforting. Countries need borders. Biden claims to understand this, but his actions to date have destroyed the border security measures in place when he took office.

To recap, when Trump first took office, the southern border was in crisis. Human smugglers and left-wing activists realized there was no need to sneak across our border; if a migrant showed up and claimed political asylum and a fear of persecution in their home country, we would release them to an American community until a hearing could be held.

The vast majority would then never show up for the hearing. Our goodwill was abused by those seeking to game our system.

Trump responded to this crisis with a few policies that worked. Most prominent is the “Remain in Mexico” program, launched in January 2019, which required that asylum-seekers wait in Mexico for the entire duration of their immigration court proceedings.

This policy eliminated the possibility of “catch and release,” where migrants are able to escape into the interior of our country after claiming asylum.

After implementing Remain in Mexico and a few other innovative policies, border enforcement operations dropped over 70% from their peak of 144,000 in May 2019. It wasn’t perfect, but some form of order was restored at our southern border.

Biden came in and rescinded all these Trump policies. He did so on purely ideological grounds. That’s his right as president, but he did it with no plan in place of his own.

The results have been a complete mess. After dropping to a low of 17,000 monthly encounters under Trump, Border Patrol is back up to a record 200,000-plus border encounters per month under Biden.

At the levels today, it’s fair to say that the U.S. effectively has an open southern border. This means it’s open season for gangs, terrorists, and drug dealers to cross almost at will. The deadly fentanyl pouring into America is just one side effect of this insanity.

Another side effect is average Americans are now more anti-immigrant than ever before. There are thousands of immigrants with amazing skills who want to come here. They can’t. The legal immigration system is broken.

Skilled immigrants can only come if indentured to an American company, and even then, our system is so difficult that many choose Canada or other places who vie for their skills. There is no appetite in America to fix this broken system because the insane border policies have driven many Americans to just want to say no to all of it.

It’s not clear if Biden is too out of it to manage America effectively or if his staff is too ideological to make sound decisions, or both. What is clear is America is suffering through amazing levels of self-inflicted crises on Biden’s watch.