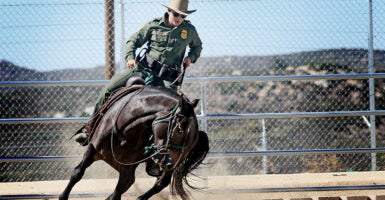 Twitter slapped a “sensitive content” label last week on a Daily Signal video report from 2017 on a mounted Border Patrol unit. The 4-minute video provides an inside look at why the Border Patrol historically has used horses.

Twitter initially denied suppressing the video, but eventually admitted to censoring the content and lifted the block Monday. But the question remains, why would the social media giant put a warning label on a 4-year-old video featuring two members of the Border Patrol’s Horse Patrol Unit in San Jose, California, discussing why horses enable agents to do their jobs?

Twitter’s action appears to be linked to incorrect reports that Border Patrol agents on horseback “whipped” illegal immigrants from Haiti as they crossed the Rio Grande River into Del Rio, Texas.

The claims were made after photos and video images went viral last week showing agents on horseback using long reins to control their horses as they tried to prevent the migrants from crossing the border.

The Border Patrol quickly debunked the notion that agents whipped migrants, and the photographer who took the photos in question said he did not witness any agents using whips.

On today’s episode of the “Problematic Women” podcast, we discuss why Twitter blocked The Daily Signal’s video and why the situation at the southern border remains a crisis.

Also on today’s show, we break down two recent examples of the far left’s attempts to erase the word “women” for the sake of gender inclusivity. We also discuss why government-funded universal day care and preschool will not serve the best interests of families and children.