The Left Is Trying to Bypass Long-Standing Pro-Life Protections in $3.5 Trillion Spending Bill. Here’s What You Need to Know. 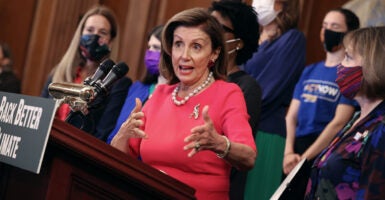 Democrats are trying to bypass longstanding policies that prevent taxpayer dollars from funding abortion in their $3.5 trillion spending bill. Pictured: Speaker of the House Nancy Pelosi, D-Calif., speaks during an event with House Democrats about the spending bill on Sept. 28. (Photo: Chip Somodevilla/Getty Images)

Congress is currently piecing together a massive $3.5 trillion spending package. The legislation covers a vast range of issues: welfare, immigration, taxes, energy, families, and much more. In its current form, the bill contains a major and divisive change to abortion policy that would reject longstanding policies—which have been enacted on a bipartisan basis and are broadly supported across the political spectrum—that disentangle tax dollars from abortion activity.

For more than four decades, Congress has taken steps to prevent taxpayer dollars from funding abortions in federal programs by incorporating “policy riders” into spending bills. These riders establish certain conditions or limitations on how federal agencies can use taxpayer dollars.

One such policy is the Hyde Amendment, which since 1976 has prohibited the Department of Health and Human Services from spending taxpayer dollars for most abortions. The principle of the Hyde Amendment has been applied in many additional contexts over the years, from foreign aid funding to government workers who get health insurance through the Federal Employee Health Benefits program.

The Hyde Amendment is good, lifesaving policy. It has saved over 2.4 million lives since its inception. And it’s also a broadly supported policy: a majority of Americans oppose using taxpayer dollars to fund elective abortion.

When Congress initially began work on this bill, the Senate voted—on a bipartisan basis—to include an amendment calling for the budget to comply with pro-life policies like the Hyde Amendment. While the move was nonbinding, it demonstrated that senators rightly recognized the process being used to consider this bill—which allows it to pass on a narrow party-line vote—could become a vehicle to bypass consensus pro-life guardrails that have become standard inclusions during the normal appropriations process.

Those senators were right to be concerned. Progressives in Congress are attempting to massively expand taxpayer spending on health care services. Yet the current bill text, as crafted in House committees, fails to incorporate language applying longstanding pro-life policies like the Hyde Amendment.

What does that mean in practice?

First, the bill creates a new program directed at individuals living in a dozen states that have elected to not expand Medicaid, a program designed originally to help lower-income Americans access care. Per the Hyde Amendment, Medicaid funds haven’t been used for more than 40 years to pay for most abortions (there are exceptions for rape, incest, and when a mother’s life is in danger). But the new program—which is basically a Medicaid look-alike program, would not include these protections—meaning taxpayers would directly pay for elective abortions within this parallel program.

But that’s not all. The Medicaid look-alike program for individuals in nonexpansion states wouldn’t go into effect until 2025. So, in the meantime, the House proposal would provide qualifying individuals with heavily subsidized Obamacare plans.

The plans would also be required to cover “family planning” services for those individuals, with the Department of Health and Human Services reimbursing insurers for 100% of the added cost—all without the Hyde-like protections that apply in other contexts of Obamacare to ensure that tax dollars aren’t underwriting abortion.

There are also massive amounts of spending for various public health programs, such as community health centers, health care education programs, medical education institutions, and more. This spending is being routed through new funding streams.

Unlike the traditional way of enacting federal health spending—i.e., Congress appropriates funding for HHS—which would be subject to a 60-vote threshold in the Senate, these new funding streams are separate from HHS appropriations and do not apply the principle of the Hyde Amendment to restrict tax dollars from promoting abortion.

It also only faces a lower threshold of votes to pass, needing only a simple majority of 51 votes.

During committee markups, multiple attempts by Republican lawmakers to remedy these problems and apply Hyde protections were rebuffed.

While the final text of the bill is still in flux—the full House still has to vote, and the Senate is still writing its version—one thing is very clear: House Democrats have crafted a bill that deliberately excludes decades of consensus policies to disentangle tax dollars from abortion activity in federal programs.

This week Sen. Joe Manchin, D-W.Va., who supports the Hyde Amendment, was asked about including it in reconciliation. His response was clear: “It has to be. It has to be. That’s dead on arrival if that’s gone.”

Failing to incorporate the lifesaving principles of the Hyde amendment in the $3.5 trillion monstrosity opens the door for taxpayer dollars to pay for elective abortions, abortion-related training for health care providers, and more.

It’s not too late to change course. Congress should reject attempts to use the reconciliation process to bypass the decades-long, bipartisan approach to applying pro-life protections in spending measures.