Who Would Hide a Jew If Nazis Took Over America? 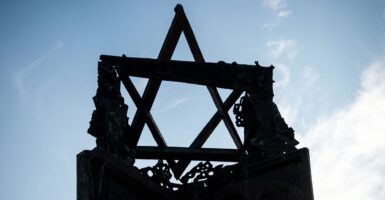 The question “Who rescued Jews?” should be of overwhelming importance to humanity as a whole if people are interested in increasing good and in decreasing evil. Pictured: The Holocaust Memorial in Bratislava’s Old Town was erected in 1996 to commemorate the 105,000 Holocaust victims from Slovakia. (Photo: Vladimir Simicek/AFP/Getty Images)

There is something about most Jews that few non-Jews know: We Jews often ask ourselves if a non-Jew in our lives would hide us in the event of a Nazi-like outbreak.

I don’t know if young Jews think about this, but nearly all Jews who grew up in the decades following the Holocaust often wondered: Would this non-Jew hide me?

I have thought about this all my life because the question “Who hid Jews?” is one of the most important questions anyone—Jew or non-Jew—needs to think about.

That question is far more important than “Who didn’t hide Jews?” because great goodness is rarer than great evil and even rarer than simple moral cowardice.

The reason for this is simple: Since the Enlightenment, i.e., since the decline of Judeo-Christian thought, most secular people have believed, and nearly all secular thought has been predicated on, the reality-denying idea that human nature is essentially good.

As a result, scholars regard good as the norm and evil as the aberration. So, they study evil far more than good.

That is why the question “Who rescued Jews?” should be of overwhelming importance to humanity as a whole. If people are interested in increasing good and in decreasing evil, what question could be more important?

A lifetime of study of this question has led me to the following answers:

No. 1: Sam and Pearl Oliner, two professors of sociology at California State University at Humboldt, were the authors of one of the most highly regarded works on altruism, “The Altruistic Personality.”

The book was the product of the Oliners’ lifetime of study of non-Jewish rescuers of Jews during the Holocaust. They themselves had been hidden by non-Jews in Poland, and I had the privilege of interviewing them.

Without hesitation, he responded, “Polish priest.” And his wife immediately added, “I would prefer a Polish nun.”

I should note that neither had a religious agenda, as both were secular Jews.

Of course, most Christians in Europe failed the moral test of the Holocaust, but so did nearly all secular intellectuals. And few Christians today deny this.

But any honest person would still bet on a priest before a doctor, artist, lawyer, or professor. It is one reason I believe that the decline of Judeo-Christian religions is a calamity: We will produce fewer people who will do great good.

But I remember one of them because it struck me as an original insight and because it made so much sense. According to this study, individuals who were considered “eccentric” prior to the war were disproportionately represented among those who hid Jews.

Now, why would that be? Why would people regarded as eccentric be more likely to risk torture and death to hide a member of a persecuted group they weren’t part of?

The answer is obvious: Eccentrics are, by definition, people who march to the beat of their own drummer, who are nonconformists, and who don’t seek social approval.

That should give us some major insights into who would save Jews—or any other group targeted for death (such as landowners in communist countries)—if our society were taken over by Nazis or communists.

If this theory about eccentrics is correct, it should give us pause.