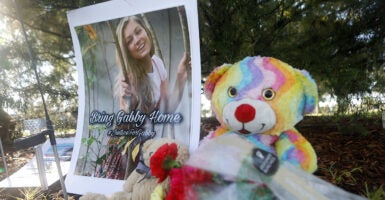 A memorial for the late Gabrielle "Gabby" Petito is seen here in North Port, Florida, on Sept. 20. A coroner has determined preliminarily that Petito died by homicide. (Photo: Octavio Jones/Getty Images)

Unless you have no cable TV and no internet, you have likely heard about 22-year-old Gabrielle “Gabby” Petito.

Petito was living the Instagram dream with her fiance, Brian Laundrie. The couple spent the past several months traveling through national parks and documenting their adventures on social media. But the picture-perfect story came to a tragic end when Petito was reported missing and subsequently found dead.

Laundrie, 23, returned to his parents’ home in North Port, Florida, without Petito on Sept. 1, and Petito’s parents reported her missing Sept. 11. Eight days later, her remains were found in Bridger-Teton National Forest in Wyoming.

Laundrie is a person of interest in the case, but went missing Sept. 14 and is thought to be somewhere in Carlton Reserve, a 25,000-acre nature reserve near North Port.

There’s no denying that Petito’s story is tragic. What’s odd is the media’s near-24/7 coverage of the case. Major TV networks are devoting much of their time to the developing case even as thousands of illegal immigrants are encamped on our southern border, Congress debates multitrillion-dollar spending bills, and America faces diplomatic tensions with France.

Much of the American public is deeply invested in Petito’s story. Why? Perhaps it’s a distraction from the domestic and international problems the country faces today. Or maybe we all see a bit of ourselves in Petito and wonder whether her tragic ending as easily could have been our own.

On today’s edition of the “Problematic Women” podcast, we break down why America has become consumed with Petito’s story. Also on today’s show, we discuss a bizarre TikTok phenomenon and why American inflation is rising at a staggering rate. And as always, we’ll be crowning our Problematic Woman of the Week.