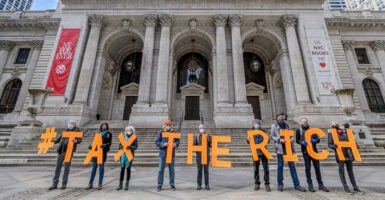 Participants in a "#Tax The Rich” demonstration in front of the New York public library in Manhattan on March 4 are apparently unaware that the top 10% of income earners already pay more than 70% of all federal income taxes. (Photo: Erik McGregor/ LightRocket/Getty Images)

President Joe Biden this week attempted to inject life into his ailing presidency by dragging out of the closet the hoariest of political cliches: “fairness” in taxation.

Touting his new $3.5 trillion tax-and-spending bill, which would radically increase corporate taxes, personal income taxes, and so-called sin taxes, Biden stated, “It’s not enough just to build back. We have to build back better than before … . I’m not out to punish anyone. I’m a capitalist. If you can make a million or a billion dollars, that’s great. God bless you. All I’m asking is you pay your fair share. Pay your fair share, just like middle-class folks do.”

So what, precisely, does Biden mean by “pay their fair share”?

Perhaps he means simple sloganeering. Like Rep. Alexandria Ocasio-Cortez, D-N.Y., donning a Cinderella ball gown emblazoned with the words “Tax the Rich” to the Met Gala—a dress made by Aurora James, a woman who owes tens of thousands of dollars in back taxes and who has received more than $40,000 in federal pandemic aid—class-warfare sloganeering is more about the sloganeering than the class warfare.

No Democrat seems prepared to define what “fairness” constitutes, other than “a word I use to pander to the rubes, while hobnobbing with the rich.”

And Biden’s “fairness” pitch has to do with good economic policy, of course. In 2008, then-Sen. Barack Obama was asked during a debate about raising the capital gains tax, even if it lowered net government revenue. He answered, “I would look at raising the capital gains tax for purposes of fairness.” In other words, Obama explicitly stated that he would damage the economy on behalf of a vague, kindergarten notion of equal outcome.

In the end, the “tax the rich to be fair” notion rests on a simple lie; namely, the lie that income distribution is purely a matter of privilege or luck. It isn’t. In the main, in a free market system, income distribution is the result of successful decision-making that must be incentivized, rather than punished, if we wish to see a more prosperous society.

Some people game the system, and some are indeed beneficiaries of insider deal-making. But most success in capitalism is due to innovation, entrepreneurialism, and creativity. Biden’s “fairness” cuts directly against these core elements of progress on behalf of political pandering.

If we truly care about fairness—a more nuanced and complete definition of fairness that encompasses rewards for productive decisions and disincentives for counterproductive decision-making—we must abandon the politically convenient notion that those who earn more have somehow stolen from the system and must be punished for their crimes.

Lack of distributive equality does not equal unfairness, and anyone who argues differently abandons the real world—and the possibility of a better life for everyone—in favor of the flattering lie that all roads ought to end in the same basic material outcome.