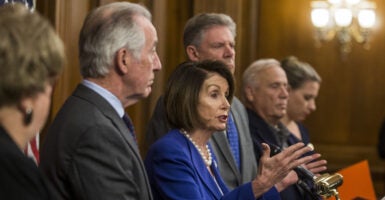 The Congressional Budget Office estimates that HR 3, called the Lower Drug Costs Now Act, would help “pay for” this fiscal incontinence by squeezing $581.6 billion from the pharmaceutical industry over the next 10 years.

More than just a tax on “evil, drug companies,” this measure would blackmail this sector, chop into its bottom line, and torpedo research and development. This would mean more ailments and earlier deaths for everyday Americans. In other words, just another day at the office for Democrats.

HR 3 would force pharmaceutical manufacturers to haggle over prices with federal functionaries. But this is not just bargaining between buyers and sellers.

HR 3 defines “negotiation” as Washington bureaucrats dictating an amount that they feel like paying for a drug, based on overseas price controls mandated via socialized medicine. Those fixed prices would regulate all sales—to Medicare, Medicaid, and private insurers.

And what if a drug company resists this new policy? That’s when federal extortion kicks in.

Pharmaceutical firms that will not swallow Uncle Sam’s prices would face taxes on gross revenues (not net profits) that start at 65%. But that tribute rises every 90 days that any such enterprise refuses to be bludgeoned.

Ultimately, as Biden said at the White House on Aug. 12, “it means drug companies would have to sell their drugs to all distributors at the Medicare price or face up to a 95% excise tax.”

Applied to dating, this is akin to, “Let’s spend the night together. If not, you’re free to go home naked—but you can keep your shoes on.” HR 3 must have been written by Democrat mega donor Harvey Weinstein.

This left-wing scheme would rip huge chunks out of drug companies’ hides. The Congressional Budget Office states, “Negotiations would reduce prices by 57% to 75%, relative to current prices.”

Of course, even a 75% sales drop beats a 95% cut. This helps explain the Leninist levels of this proposed new tax.

Health care consultancy Avalere predicts that, across this industry, HR 3’s price controls could affect up to 550 drugs and slash drugmakers’ aggregate revenues by $1.65 trillion within five years.

So, what? If pharmaceutical CEOs must postpone their new yacht purchases or buy slightly smaller ski chalets, they will survive.

If only the world were so cartoonishly simple.

Punching the drug industry in the mouth gives regular patients bloody lips. If HR 3 slices drug companies’ incomes, they will have less money to create new and better drugs.

“The proposals that we’re seeing from Congress will devastate this industry,” said Merck Chairman Kenneth Frazier. “Our ability to fund [research and development] inside Merck will be reduced by almost half.”

University of Chicago professor Tomas Philipson expects HR 3 to abort between 167 and 342 new drugs by 2039.

A vaccine against the common cold? A pill that stops miscarriages? A cure for prostate cancer? Gummies that reverse Alzheimer’s? HR 3 could entomb such inventions in their test tubes.

“If the government can pick any arbitrarily low price it wants and prevent a company from saying ‘no’ by threatening it with a ruinous 95% tax, then I could not justify any biomedical [research and development] investment to my investors,” said financier Peter Kolchinsky. “In other words, we should expect a near total collapse of R & D funding.”

Among other innovations, pharmaceutical companies have created drugs such as Avastin and Gleevec that—for many—have transformed cancer from a death sentence into a temporary headache. Descovy and Truvada are, essentially, AIDS vaccine pills. And former President Donald Trump’s Operation Warp Speed inspired Pfizer, Moderna, and Johnson & Johnson to deliver COVID-19 inoculations in a record 12 months.

The cure-crushing HR 3 is how Democrats say thank you for these miracles and threaten unseen breakthroughs.