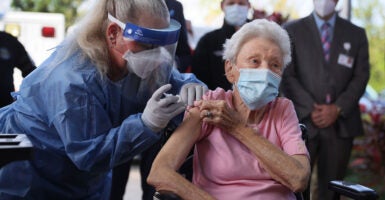 The New York Times reports that “Pfizer Reaps Hundreds of Millions in Profits From Covid Vaccine.” The pharma giant Pfizer earned revenues of $3.5 billion in the first three months of 2021, estimated to generate around $900 billion in profits.

All the company had to do was create a safe drug that effectively alleviated the threat of the most deadly virus we’ve faced in over a century—one responsible for hundreds of thousands of American deaths and a cost of trillions in economic damage—and then manufacture and dispense hundreds of millions of doses in the shortest span of any vaccine ever created.

“Unlike several vaccine manufacturers that vowed to forego profits during the Covid-19 pandemic, Pfizer planned to profit,” explained former Secretary of Labor Robert Reich to his 1.3 million followers. “Today it announced that the vaccine brought in $3.5 billion in the first three months of 2021, nearly a quarter of its total revenue.”

Why should Pfizer forgo profits that were netted using its time, talents, efforts, and experience? Does Reich forego his $300,000 a year teaching anti-capitalist bunkum to impressionable young minds?

Progressives—and increasing numbers of conservatives angered by social media partisanship and industry wokeness—have made “corporations” an amorphous enemy. There is plenty to grouse about, but Big Pharma saves more lives every year than all government programs combined.

Setting aside COVID-19 for a moment, its innovations have transformed numerous once-deadly ailments into nothing but historical footnotes. It helps millions of Americans who suffer from debilitating depression and pain live more bearable lives. Pharma does it for money. Just like you do what you do for money.

Of course, if profits were predicated on a meritocracy of useful goods and services, Berkeley would sue Reich for millions. And yet, it’s his outlook that seems to be winning in Washington.

Sen. Bernie Sanders, I-Vt., and other liberal Democrats have been urging President Joe Biden to support a COVID-19 vaccine intellectual property waiver, arguing, according to Reuters, that “it would help save lives and prioritize people over drug company profits.” And this week, U.S. Trade Representative Katherine Tai announced that the Biden administration is going to negotiate with the World Trade Organization for ways to coerce companies to undo those protections.

First of all, the entire notion of having to choose between people and profits, a belief that undergirds much of leftist economics, is debunked by the existence of the COVID-19 vaccine. Big profits and big humanitarian efforts coexist.

“I want to create something to help humanity” and “I want a boatload of cash for doing it” are perfectly compatible positions—and the latter is often necessary to make the former a reality. I hope everyone who helped save your frail grandfather or your immunocompromised family member from a premature death gets filthy rich.

Secondly, waiving intellectual property rights ex post facto is flat-out state-sponsored theft. Normalizing such an action by the government would be disastrous. Why would pharma companies pump billions into research and development if the government starts changing the terms after the job is done? Who is going to do the job if they don’t? The Centers for Disease Control and Prevention?

Without strong protections of intellectual property, companies won’t make enormous investments of capital in the development of new drugs—the average cost of which is nearly $3 billion. American companies are given a 20-year monopoly on the idea. Even in Europe, the disconnect between the marketplace and the cost of pharmaceuticals undermines innovation and disincentivizes technological advances and access.

There are numerous complicated reasons for why some nations prosper enough to devise and mass-produce effective vaccines in a mere six months, while others probably couldn’t do it in six years, or even 60. One reason is that some nations embrace competitive free markets and strong property rights and others do not. We can find ways to help others without corroding the ideas that allowed us to succeed.