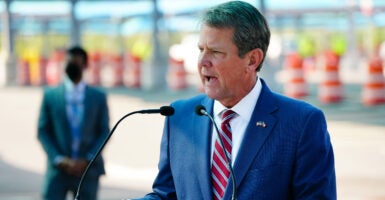 Georgia Gov. Brian Kemp says his state remains strong economically because he opened it up for business more quickly than most other states.

“They are not going to sit in their basement and lose everything that they have worked decades for,” the Republican governor said of Georgia business owners in remarks at a “Save Our Paychecks” event in Atlanta last week at the Round Trip Brewing Co.

“They are also not going to sit in their basement and not pay the people that are working for them because they know their business would be nothing without their people and that they have to feed their family,” Kemp continued.

These are people that have never asked for anything from the government. And now the government wants to give them everything so that they become dependent.

Kemp was the keynote speaker at the “Save Our Paychecks Tour” event, co-sponsored by Heritage Action for America, the grassroots partner of The Heritage Foundation, of which The Daily Signal is the news outlet. Heritage Action teamed up with the Coalition to Protect American Workers for the event.

Kemp said that Georgia has ranked as a top state for business for eight years in a row, and that even during the COVID-19 pandemic, the state drew $11 billion worth of new private investment, a 5% increase, and 33,000 new jobs. About three-fourths of those new jobs were outside the Atlanta region, so the growth has been statewide.

He added that Georgia has a 3.7% unemployment rate, compared with the 5.2% rate nationally.

“We all believe in ‘a hand up,’ but not a perennial bailout,” he said, referencing the $3.5 trillion spending bill pushed by congressional Democrats. “… We fought to protect lives and livelihoods, or you could substitute in there paychecks. We fought for that to give Georgians a fighting chance, to let them live to fight another day.”

Kemp said the Biden administration and Democrats in Congress don’t want to see economic growth in Georgia or elsewhere.

They know if they break the back of working Georgians, small-businesses owners, and great entrepreneurs in our state, they know they will be dependent forever.

That is what this fight is all about. That is why what we are seeing in Washington is such a disaster. The runaway inflation we are seeing right now is only going to get worse with these things.

Kemp has encouraged Georgians to get vaccinated, but opposes government mandates. He said private businesses have the right to mandate, though that’s not the route he would take. But he urged government to stay out.

Rep. Rick Allen, R-Ga., had earlier urged Georgians to consult their doctors and not listen to President Joe Biden or be swayed by social media.

He noted in his congressional district that hospitals’ intensive care units are full of COVID-19 patients, many of whom were unvaccinated.

“We have many unvaccinated folks, and 90% of those folks don’t make it back home,” Allen said. “This is a difficult, difficult disease, and it is important that we—you—as citizens of this great state go see your physicians, get your physician’s advice.

The congressman noted that during the 2020 presidential campaign, now-Vice President Kamala Harris politicized the vaccine, saying she wouldn’t take one pushed by then-President Donald Trump. Despite that, Harris did take the vaccine, which was fast-tracked under the Trump administration’s Operation Warp Speed.

Rep. Andrew Clyde, R-Ga., joked that Democrats in Congress are addicted to what sounds like the drug opium, but he was referring to “OPM” as an acronym for “other people’s money.”

“OPM is the drug that tax-and-spend Democrats, liberals, communists, Marxists, and Washington swamp creatures are hooked on,” Clyde told the audience. “It is a drug they need to go to treatment for, because once you bow down to it, it’s almost impossible to get it out of your system.”

They don’t care that they are burdening your children and your grandchildren with unspeakable debt. That’s why we are almost $28.8 trillion in debt and about to add another $4.7 trillion if Nancy Pelosi, Chuck Schumer, and Joe Biden get their way.

That’s right, the upcoming budget reconciliation bill and the everything-is-infrastructure bill together would add another $4.7 trillion in new national debt.

Rep. Jody Hice, R-Ga., said he can’t think of a good decision from Biden and Democrats since the president took office on Jan. 20.

“Expanding the welfare state. Like that’s a good idea, but that’s what they’re doing,” Hice said.

We are watching the crippling of our labor force. Who thinks this is good? We are watching inflation skyrocket right now. Underneath all of that, we have out-of-control spending.

Our national debt is ballooning out of control. All of us are going to suffer for this.

Rep. Drew Ferguson, R-Ga., said what worries him most is that Democrats want to add to discretionary spending.

“They are fixing to provide child care for everybody. They are going to take it from the private sector and put it in our public schools. How many of you all think indoctrination should start at year three of life in the public school system?” Ferguson asked.