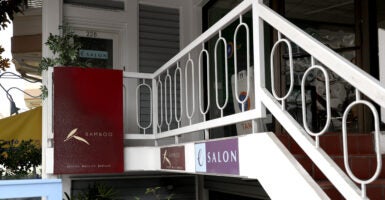 House Speaker Nancy Pelosi had her hair done at eSalon in San Francisco late last summer. The California Democrat drew criticism for insisting on getting her hair done despite the salon being closed under COVID-19 restrictions. (Photo: Justin Sullivan/Getty Images)

“I thought if I ever lost my business, I would lose it in an earthquake,” Kious said Tuesday, speaking at a salon in Fresno, California, for the first “Save Our Paychecks” event sponsored by Heritage Action for America. “Never did I think I would lose everything I worked for by leftist politics. Gone.”

Kious was traveling when she saw the video footage of Pelosi, who visited the now-defunct eSalon on Aug. 31.

“I went through the exact footage of her walking through my reception area with no mask,” Kious said. “I literally felt like she took a knife and stabbed me in the stomach. … I know inside me what she did was wrong, completely wrong.”

After her maskless visit to the salon made news headlines, Pelosi said: “It was clearly a setup.”

I never set her up. That was a lie. I’ve had cameras in there since I opened. I didn’t turn them on. They are on all the time.

[Pelosi’s] assistant had messaged the stylist, I believe, saying, ‘I need my hair done.’ I actually didn’t know she would go in. I thought maybe he would go to her house.

Kious recalled that her employees, as well as independent hairdressers who rented chairs in her salon, were crying, unsure of how they would support their families during the COVID-19 lockdown.

Salon chairs were spaced 10 feet apart, plexiglass separating them. The health code was also posted on the door.

Kious said she doesn’t plan to open another salon, and now rents a chair from Fresno salon owner Bree Gentry.

Gentry hosted the Heritage Action event at her salon. She said it was tough surviving the lockdown.

“I’m proud to say that you have a space to stand in today because we also survived 2020, 2021, and we weren’t sure we were going to make it. It got a little shaky,” Gentry said, noting how she saw other salons close.

I live in fear that that opportunity is going to be taken from me again, but I serve a good God, and he has been faithful and showed up every day, so I give him full credit.

In August and September, Heritage Action and the Coalition to Protect American Workers will host state and national officials at local businesses across the country for “Save Our Paychecks” events aimed at pointing to problems with President Joe Biden’s policies.

“We are going to try to keep telling these stories, city after city, until Biden listens,” Jessica Anderson, executive director of Heritage Action for America, told the Fresno audience.

The hardest part of this is, we can’t get it through his head how much hurt is actually happening to us, voters, Americans, everyday hardworking people that are just trying to make it work for our families.

About 40,000 small businesses had closed in California by September 2020, the time of Pelosi’s salon visit, and thousands more have closed since, according to Heritage Action.

About 40% of California’s workers are out of the labor force.

Biden’s tax proposals would increase average taxes in California by a total of $14,000 from 2022 to 2031, according to the Coalition to Protect American Workers. Californians would see an average increase in taxes of $755 in 2022, and more each year after.

Members of Congress work for the public and at the end of the day want to keep their jobs, the grassroots director for Heritage Action, Janae Stracke, told the Fresno audience.

“One of my favorite things to tell people when I travel around the country is how easy it is to make a member [of Congress] squirm,” she said, adding:

If you write a letter to the editor of a local newspaper, they are reading that. Their staff is reading that, and they really do care.

So, when you start using your voice, it does have an impact. And we want to give you the platform to do that and to amplify your voice.