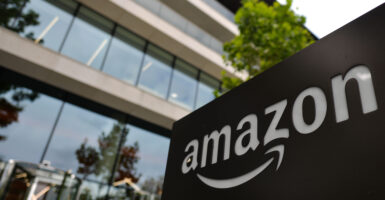 "We will be providing additional training to ensure our teams are clear on our policies and how to enforce them in the future," an Amazon spokeswoman says, explaining that the retailer never should have rejected The Heritage Foundation's ad for a book on Black Lives Matter leadership by one of its scholars. (Photo: Artur Widak/NurPhoto/Getty Images)

Amazon on Thursday reversed its earlier decision to block an advertisement for a new book that is critical of the leadership of the Black Lives Matter movement, saying it had not properly enforced its own policies.

“BLM: The Making of a New Marxist Revolution” is the latest book by Mike Gonzalez, a former reporter and opinion editor for The Wall Street Journal who is a senior fellow at The Heritage Foundation, parent organization of The Daily Signal.

The Heritage Foundation this week attempted to buy an ad on the digital platform of Amazon, the world’s largest retailer, to promote Gonzalez’s book.  However, Amazon notified Heritage on Tuesday that it had rejected the ad.

“Our policies were inaccurately enforced, and the book is now being advertised,” an Amazon spokeswoman told The Daily Signal in an email Thursday morning. “We are providing training to ensure our teams are clear on our policies.”

Amazon’s ad moderation team made the error and corrected it, the spokeswoman said later in the day.

“Our policies were not enforced correctly in this case,” she said. “We fixed the error, communicated with the advertiser [Heritage], and the book is now being advertised. We will be providing additional training to ensure our teams are clear on our policies and how to enforce them in the future.”

Gonzalez said he was pleased with the news about his book, which was published Sept. 7 and tops Amazon’s own Black and African American History category, but still has questions.

“I’m glad they reversed their decision. But who made the decision in the first place?” Gonzalez said in an email to The Daily Signal. “Was it someone who just disagreed with its content and decided to ban it? Amazon has incredible power. It needs clear rules that are not political [or] partisan.”

Amazon had notified Heritage in an email message at 3:48 a.m. EDT Tuesday that the think tank’s ad for Gonzalez’s book “no longer complies with our current Creative Acceptance Policies.”

We have determined that the ad was incorrectly rejected from our end. Thanks for explaining the issue to us, and we apologize for the inconvenience caused. The ad was remoderated and is now in approved status.

Amazon apparently did not at any time block Gonzalez’s book about Black Lives Matter from being sold on the website, only Heritage’s advertising for it.

The incident shows that some parties, but hardly all, can push major technology companies to respond to customer complaints, said Kara Frederick, a research fellow in Heritage’s Center for Technology Policy.

“This episode is a reminder that while sometimes Big Tech can be pressured to respond in certain cases of wrongdoing, there are so many more instances where those without the resources or large-enough public profile simply have to live with the arbitrary decisions made by these companies,” Frederick said in a public statement, adding:

The fact that this was the result of human error further demonstrates the need for Big Tech companies to establish clear, sensible, and consistent rules and policies, and then implement those rules and policies fairly across the board.

They also must be willing to publicly admit mistakes when they do occur, whether intentional or not. Big Tech’s influence over everyday American life continues to grow. It’s vital that we establish clear standards for how these companies behave, and mechanisms to hold them accountable when they don’t.