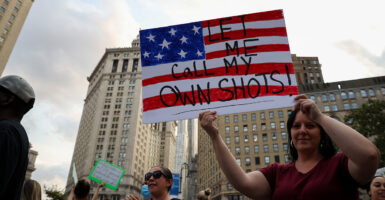 Brnovich announced the lawsuit Tuesday, explaining during a press call that he thinks the president lacks the constitutional authority to require the vaccination of millions of Americans.

“This lawsuit is about federalism, constitutional principles, and the fact that the Biden administration has no authority under the Constitution to mandate COVID-19 vaccines. Period,” Brnovich, a Republican, said.

The attorney general says he plans to prove that the Biden administration’s vaccine and testing policy undermines federalism as it infringes on the rights and liberties of states and individual Americans.

The Arizona attorney general argued that the “Biden administration does not have the authority to issue any executive order for anyone to promulgate any rules related to public health, safety, and welfare, because those are issues that are supposed to be left to states.”

“Arizona will not tolerate this assault on our sovereignty,” Brnovich wrote on Twitter with a video announcing the lawsuit.

Speaking from the White House on Sept. 9, Biden announced that he is directing the Department of Labor to write a rule requiring organizations with 100 or more employees to ensure all their workers are vaccinated or tested weekly for COVID-19. The Occupational Safety and Health Administration would be responsible for the implementation and enforcement of this rule, which has yet to be released.

In addition to proving Biden’s vaccine mandate is unconstitutional, Brnovich’s legal action also seeks to show that the order violates the equal protection clause of the Constitution.

The order favors “migrants that have crossed into the country illegally over legal U.S. citizens,” he said.

As thousands, even millions, of migrants cross the border, “the federal government is allowing them the choice, even though they are not citizens, whether to get the vaccine or not, and not providing that same courtesy to U.S. citizens,” Brnovich said.

The lawsuit, which was filed with the U.S. District Court in Arizona, is the first formal legal action taken against Biden’s COVID-19 vaccine order.

The attorney general plans to join other lawsuits after the Occupational Safety and Health Administration releases the details of the rule, Katie Conner, a spokeswoman for Brnovich, said during the press call.

Ultimately, the Arizona attorney general says he is asking for the court to issue an injunction to stop the mandate from taking effect.

Brnovich appealed to America’s history and revolutionary spirit in a press release announcing the lawsuit, saying, “even [King] George III wouldn’t have dreamed that he could enact such sweeping policies by royal decree alone.”