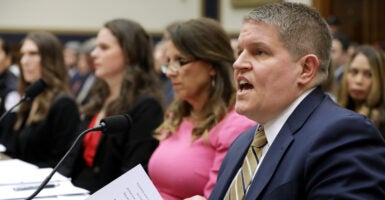 President Joe Biden on Thursday announced the withdrawal of his nomination of gun control activist David Chipman to run the Bureau of Alcohol, Tobacco, Firearms and Explosives.

Biden blamed only Republicans in a written statement about the withdrawal, however.

“He would have been an exemplary director of the ATF and would have redoubled its efforts to crack down on illegal firearms traffickers and help keep our communities safe from gun violence,” the president said.

“Chipman has a long history of advocating restrictive gun control measures that fly in the face of the Second Amendment’s text, history, and tradition,” Heritage Foundation legal fellow Amy Swearer, who researches and writes about gun rights, said of Biden’s decision.

But Biden said Republican lawmakers were the problem.

“Unfortunately, Republicans in Congress have made clear that they intend to use gun crime as a political talking point instead of taking serious steps to address it,” Biden said. “That’s why they’ve moved in lockstep to block David Chipman’s confirmation, and it’s why they side with gun manufacturers over the overwhelming majority of the American people in opposing commonsense measures like universal background checks.”

In July, every Republican member of the Senate Judiciary Committee demanded a new confirmation hearing for Chipman, following allegations that the nominee made a racist comment while working at ATF around 2007.

Senate Minority Leader Mitch McConnell told The Reload, which quoted current and former ATF agents on the comment, that Biden should withdraw Chipman’s nomination because of the allegations.

Chipman isn’t a supporter of the Second Amendment and should not have been considered for the position, said Jessica Anderson, executive director of Heritage Action for America.

“Chipman would have used his post to attack the constitutional rights of Americans across the country,” Anderson said in a written statement.

Heritage Action is the grassroots partner of The Heritage Foundation, the parent organization of The Daily Signal.

“Thanks to the millions of conservative activists who used their voices to stand up for their Second Amendment rights, President Biden was forced to pull his hand-picked nominee,” Anderson said. “This defeat proves the power of grassroots Americans and is a win for the Constitution and law-abiding gun owners across the country.”