On 20th Anniversary of 9/11, We Regrettably Are Less Safe 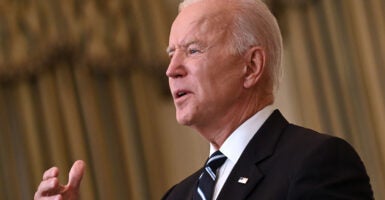 President Joe Biden, seen here at the White House on Sept. 9 issuing directives to boost COVID-19 vaccinations, ordered a badly mismanaged pullout of Afghanistan that put terrorists back on offense and that emboldens our other adversaries. (Photo: Brendan Smialowlski/AFP/Getty Images)

On this major anniversary of the 9/11 terrorist attacks, we Americans have to ask ourselves: “Are we safer now than we were 20 years ago?”

It’s difficult to admit, but we aren’t.

The Biden administration’s reckless pullout of Afghanistan put terrorists back on offense and emboldens our other adversaries.

The southern border, opened by this administration, provides a wide path for terrorists to enter the U.S.

Meanwhile, the federal agencies responsible for preventing terrorist attacks are politicized and looking inward to combat “white supremacy” and “extremism” based on political opinion or association.

Americans are right to feel abandoned and at risk, thanks to the decisions and policies of this administration.

Who would imagine that 20 years after 9/11, the Taliban would govern more territory; have more allies, including China; have more money than it did two decades ago; and have our weapons?

Yet President Joe Biden’s shocking decisions regarding Afghanistan have snatched defeat from the jaws of victory.

Now, he desperately wants America to move on and forget about the past two weeks in Kabul. Biden clearly doesn’t understand human nature or Americans if he thinks we will move on from the needless loss of 13 military service members, abandoned Americans who are now hostages, and many billions of dollars’ worth of high-tech military equipment and weapons left behind for the Taliban to capture and use against us.

We also cannot move on, per Biden’s wish, because he has put America in a very difficult position relative to our adversaries.

Biden not only has revitalized the Taliban and put al-Qaeda and ISIS back in the fight, his weakness emboldens China, Russia, Iran, and North Korea to aggressively pursue their geopolitical schemes, which will not be in America’s interest.

As such, the U.S. must increase its vigilance to prevent terrorist acts against Americans at home and abroad, while also blocking dictatorial regimes’ expansion and aggression.

Like an anti-Midas, Biden has intentionally weakened America’s ability to prevent more terrorist attacks. In addition to removing intelligence-gathering capabilities in Afghanistan, the Biden administration rushed to bring tens of thousands of Afghans directly to the U.S.—rather than safe third countries—with questionable vetting.

Some have since been flown to Kosovo after discovering subsequent derogatory information.

Terrorists exploit refugee and migration flows to gain a foothold in their target countries. The Biden administration insists it is robustly vetting Afghan evacuees, but against what data? We no longer have staff or access to documentation in Afghanistan to verify claimed identities or background information.

Furthermore, the administration has squandered its credibility in its portrayal of the Afghan withdrawal.

The administration also has stated that it has expedited the vetting of Afghans and that it seeks to resettle such Afghans as quickly as possible. But the faster vetting is done, the less thorough it is.

Americans should not have confidence that there are no terrorists or other bad actors among the Afghans this administration already has brought directly to the U.S. The administration should continuously vet such populations for a reasonable period of time to gain confidence in the bona fides of the individuals and to prevent radicalization.

Another front Biden has weakened against preventing terrorist attacks is our southern border. Starting on his first day in office, Biden stopped border security, immigration enforcement, and asylum-fraud prevention policies and programs.

Predictably, America has since seen historic flows of illegal aliens, including known and suspected terrorists and serious criminal aliens, and poisonous illicit drugs pour across our border.

Surely, al-Qaeda and other terrorist groups see our southern border is a wide open avenue into the U.S. Yet an unfazed Biden administration shows no sign of starting to secure the border, enforce immigration laws, or prevent asylum and other immigration fraud.

The Department of Homeland Security also prioritizes addressing climate change, as prominently displayed on its homepage. Even if the department properly reprioritized radical Islamic terrorism as the homeland’s No. 1 threat, the department does not have the resources to adequately focus on preventing terrorist attacks.

Also responsible for combating terrorism, the FBI is focusing on diversity, hate crimes, and the Jan. 6 Capitol violence. Both the Department of Homeland Security and the FBI have their eye off the terrorism ball, and Americans are less safe for it.

Twenty years after the horrific attacks on our homeland, the world is just as dangerous. The Biden administration’s debacle in Afghanistan has made another 9/11 more likely.

The historic Biden border crisis is a fundamental assault, not just on our system of laws, but a major national security threat. And our most vital agencies are increasingly characterized by political maneuvering, rather than a singular focus on protecting Americans.

All of that only makes the 20th anniversary of 9/11 even more tragic.