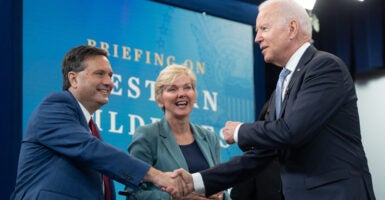 When President Joe Biden signed an executive order early in August calling for half of all new vehicles to be electric by 2030, White House chief of staff Ron Klain predicted success.

“In the effort to combat the climate crisis—and create a lot of great jobs in the US doing it—today will be a historic day at the White House,” Klain tweeted.

Later in August, the Democrat-controlled House passed a Biden-backed $3.5 trillion budget framework encompassing many “Green New Deal” initiatives such as a “Climate Corps” and a program to encourage utilities to sell carbon-free energy.

Klain enthusiastically predicted success with green energy in the last Democratic administration’s $535 million loan guarantee for Solyndra, a politically connected company that made solar panels. That decision became one of the most embarrassing scandals of President Barack Obama’s two terms.

Government documents—some long public, others obtained by The Daily Signal in a Freedom of Information Act request—tell the story of how immersed Klain was in pushing taxpayer dollars to a company that soon collapsed. The Solyndra mess became symbolic of crony capitalism and climate boondoggles.

Despite how the government loan guarantee for Solyndra turned out, Klain’s enthusiasm for government support of green energy hasn’t waned—based on his tweets, anyway.

In May, Klain had boasted about the Biden administration’s approval of the first offshore wind farm.

“More progress on the clean energy front,” the White House chief of staff tweeted in March about a New York Times report.

The Times’ article boosted the 2009 American Recovery and Reinvestment Act—better known as the Obama administration’s “stimulus” bill—and concluded that federal loans for green energy both created jobs and brought in revenue.

“This @NyTimes story reports that the ARRA actually made money for the taxpayers, and created 1 million green energy jobs,” Klain tweeted.

Klain was a Biden point man on Capitol Hill for the $1.1 trillion infrastructure legislation as well as the separate $3.5 trillion spending bill. He met in March with the House sponsor of the Green New Deal, Rep. Alexandria Ocasio-Cortez, D-N.Y., and other House progressives.

Biden nominated Klain’s wife, Monica Medina, as assistant secretary of state for the Bureau of Oceans and International Environmental and Science Affairs, a top environmental position.

In March 2020, Medina, founder and publisher of the environmental e-newsletter Our Daily Planet, wrote a Washington Post op-ed about the “environmental upside” of the COVID-19 pandemic.

‘Potential for Another Solyndra’

The Times describes Klain, a longtime Biden loyalist, as “the essential nerve center of an over-circuited administration whose day-to-day doings reflect how this White House works and what it aspires to.”

Klain, who turned 60 in August, is credited by other left-leaning outlets such as The Washington Post, the Daily Beast, and The American Prospect with taming the Democrats’ progressive wing.

During the Solyndra scandal, Klain also was chief of staff to Biden, who was then vice president.

With Klain having more power today in addressing contemporary energy issues, remembering a decade-old scandal informs what might be ahead for the Biden administration, said Mike Palicz, federal affairs manager for Americans for Tax Reform.

“Ron Klain was at the heart of the Solyndra scandal,” Palicz told The Daily Signal in a phone interview. “There is potential for another Solyndra with subsidies for electric-vehicle charging companies. That’s about picking winners and losers, the same as Solyndra.”

Palicz also noted that the Biden administration is pushing for $174 billion in spending to “create good jobs electrifying vehicles.”

This, he said, is similar to the Obama administration’s failed “Cash for Clunkers” program, also funded under its stimulus legislation, which attempted to turn old cars into electric vehicles.

The National Bureau of Economic Research reported in 2014 that about 60% of the subsidies went to households that would have purchased an electric vehicle during the two-month program anyway.

The Brookings Institution, a center-left think tank, found in 2013 that the “Cash for Clunkers” program spent $1.4 million for every job it created.

The White House did not respond to The Daily Signal’s request for comment for this report.

The Energy Department provided the $535 million loan guarantee to Solyndra as part of the 2009 stimulus bill. Not long after building its factory, though, the California company filed in 2011 for bankruptcy protection and an FBI investigation ensued.

Solyndra did not attract a buyer and closed down later in 2011. After that, other subsidized green energy companies also collapsed.

It was Klain who suggested that Obama visit Solyndra in 2010, batting away concerns from other Obama aides, including senior adviser Valerie Jarrett.

Planning for a cash infusion to Solyndra from taxpayers began early, and Klain had a key role in distributing the funds provided by the American Recovery and Reinvestment Act after Obama signed the legislation.

On March 10, 2009, Matt Rogers, senior adviser to then-Energy Secretary Steven Chu, sent an email to Klain while he was the vice president’s chief of staff, saying that “all is on track for this announcement in northern California.”

Rogers touted the rapidity of the effort, saying in the email: “First loan guarantee from the department of energy—delivered in 60 days from [Obama’s] inauguration.”

“The deal is to bring private capital off the sidelines,” Rogers added.

However, Solyndra executives later would refer to the Obama administration as the “Bank of Washington.”

On Aug. 10, 2009, less than seven months into Obama’s first term, Klain learned that the Office of Management and Budget expected the Obama administration’s $535 million loan guarantee for Solyndra to close by the end of that month.

Klain seemed to express excitement and wanted to know how quickly Obama or Biden could visit Solyndra.

“This is great. When is vp next in California? When is potus in California?” he asked, referring to Biden and Obama, respectively.

Jarrett, the senior Obama adviser, emailed Klain on May 24, 2010, to relate concerns she had heard about Solyndra even as Obama was scheduled to visit the company the next day.

“We clearly need to make sure that they are stable and solid,” Jarrett told Biden’s vice presidential chief of staff in the email.

Klain checked it out, telling Rogers and Chu’s chief of staff, Rod O’Connor, in an email: “Can you guys look at this ASAP and get back to me.”

In an email response, Rogers characterized the financial concerns as “standard for companies pre-IPO,” referring to an initial public offering.

Klain replied: “Thanks, this looks fine to me.”

As Biden’s chief of staff, he then responded to Jarrett the same day.

“Sounds like there are some risk factors here, but that’s true of any innovative company POTUS would visit,” Klain said in an email to Jarrett.

“It looks OK to me,” Klain wrote, adding: “The reality is that if POTUS visited 10 such places over the next 10 months, probably a few will be belly-up by election day 2012—but that to me is the reality of saying we want to help promote cutting-edge, new-economy industries.”

In September 2011, a little more than a year later, Solyndra went—in Klain’s words—belly-up. The company declared bankruptcy and put 1,100 employees out of work.

In an appearance Nov. 17, 2011, before the House Energy and Commerce subcommittee on oversight and investigations, Chu said he wasn’t part of the exchange with Klain and Jarrett.

Later communications, The Washington Post reported, showed that Solyndra executives and Energy Department officials attempted to keep the financial problems and layoffs secret until after the 2010 midterm elections.