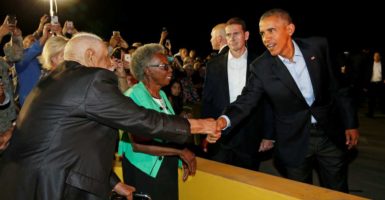 President Barack Obama discarded eight years of controversies surrounding his administration, including the targeting of conservative groups, veterans lacking health care, the administration’s response to a terrorist attack weeks before the 2012 election, and a botched gun sting.

During a Democratic fundraising event in San Diego Sunday, Obama attacked Rep. Darrell Issa, R-Calif., the former chairman of the House Oversight and Government Reform Committee, for the various investigations into the administration.

“Here’s a guy who called my administration perhaps the most corrupt in history, despite the fact that actually, we have not had a major scandal in my administration,” Obama told Democratic donors.

The tactics of any congressional oversight chairman could be a matter of debate, as could the definition of “scandal” and, if it is a scandal, whether it’s a “major” one.

“We have not had a major scandal in my administration,” @Potus says.

What isn’t debatable is that the Obama administration has experienced numerous controversies that have led to administration officials resigning from office, being held in contempt of Congress, the establishment of a select investigative House committee and several Justice Department investigations.

Without offering comment for this story, a senior White House official referenced several commentators that have noted Obama did not have a significant scandal in comparison to previous presidents. A recent USA Today editorial noted that Obama has had a largely “personally scandal-free presence in the White House.”

Here’s a list of nine controversies that Obama didn’t mention at the Democratic fundraiser, but that nevertheless leave many unanswered questions.

The move was meant to preempt the release of a Treasury Inspector General for Tax Administration, which found a sustained targeting of conservative groups applying for tax-exempt status.

Lerner asserted her innocence in the matter before the House Oversight and Government Reform Committee, then invoked her Fifth Amendment rights against self-incrimination to avoid cross-examination of her claims. The House voted to find her in contempt of Congress.

Justice Department prosecutor Barbara Bosserman, who had donated $6,750 to Obama’s campaign and the Democratic National Committee from 2004 to 2012, investigated the matter and declined to bring up charges.

House investigators did not find a direct link from the White House to the IRS scandal.

The Justice Department was aware of the matter two years before Congress and took no action, according to documents obtained by the government watchdog group Judicial Watch through the Freedom of Information Act.

The Department of Veterans Affairs inspector general first noted the waiting list problem at a Phoenix clinic in 2014 and then found other clinics with similar problems. Veterans were placed on phony waiting lists, and some even died while waiting for care. VA Secretary Eric Shinseki resigned from his position.

Last year, in another follow-up report, the inspector general found about 800,000 records and applications delayed in the VA system, and more than 300,000 might have died.

Earlier this month, another inspector general report found that at the Phoenix clinic, where the controversy was first discovered, another 200 veterans died while waiting for care on the waiting list and at least one could have been saved had he received proper care on a timelier basis.

Both Republicans and Democrats expressed outrage over the matter.

In 2012, Martha N. Johnson, the administrator of the General Services Administration, resigned after the federal procurement agency was engulfed in a controversy. The department was accused of allowing excessive spending on travel and conferences for the agency and employees.

Johnson admitted in her resignation letter that “taxpayer dollars were squandered.”

Some of the spending included a Las Vegas trip where employees had a $31,000 reception that included a clown mind reader.

The organizer of the event, GSA regional commissioner Jeffrey Neely, was photographed in a Las Vegas hotel bathtub with a wine glass. Neely was indicted on three counts of making false claims, one count of using false documents, and one count of making false statements. He was later sentenced to three months in prison.

4.) Attack on the Benghazi Compound

On Sept. 11, 2012, weeks before a presidential election, terrorists attacked U.S. government facilities in Benghazi, Libya. Obama administration officials initially blamed this attack on a spontaneous protest against an anti-Muslim YouTube video that spun out of control.

Late that night, then-Secretary of State Hillary Clinton released a statement that said: “Some have sought to justify this vicious behavior, along with the protest that took place at our embassy in Cairo yesterday, as a response to inflammatory material posted on the internet.”

However, the administration eventually conceded the incident was a terrorist attack. Obama had been campaigning on having decimated al-Qaeda and killing Osama bin Laden. So a terrorist attack interfered with the campaign narrative that the event was sparked by a protest.

Before a Senate panel in January 2013, Clinton famously said, “What difference at this point does it make,” whether the attack was prompted by a terrorist or an out-of-control protest.

In 2014, then-House Speaker John Boehner, R-Ohio, named a House select committee to investigate the Benghazi incident. The committee issued its final report in July, which found no conclusive cover up by the administration.

It was the Benghazi committee that first discovered that before, during, and after her time as secretary of state, Clinton maintained a private email server. This prompted the FBI to investigate questions of whether Clinton violated the law in terms of storing classified information.

In July, FBI Director James Comey announced the investigation was completed and concluded that Clinton and her staff had been “extremely careless.” However, he determined that there was no intent to put classified national security information in danger and would not warrant prosecution.

During her testimony, Clinton told the House Benghazi committee, “There was nothing marked classified on my emails, either sent or received.”

House Oversight and Government Reform Committee Chairman Jason Chaffetz, R-Utah, said he would ask the FBI to investigate whether Clinton lied to Congress.

Operation Fast and Furious was a Bureau of Alcohol, Tobacco, Firearms, and Explosives program, meant to be a sting operation. It allowed about 2,000 guns to flow to Mexican drug trafficking organizations under federal supervision before authorities lost control of the guns.

Fast and Furious began in the fall of 2009 and was halted in December 2010 after two of the guns from the operation were found at the murder scene of Border Patrol Agent Brian Terry in Arizona.

After more than a year of the Justice Department failing to provide documents to the House Oversight Committee, 17 House Democrats joined nearly all House Republicans to find Attorney General Eric Holder in contempt of Congress.

In June, documents showed that 69 people were killed by lost guns the ATF allowed to flow into the country, according to documents obtained by Judicial Watch.

The Energy Department provided a $535 million loan guarantee to the politically connected solar panel firm Solyndra as part of the 2009 stimulus bill. Not long after building its factory, the California firm filed for bankruptcy protection and an FBI investigation ensued. The company did not find a buyer and eventually closed down.

On Election Day 2008, hours before Obama was first elected, two members of the New Black Panther Party stood outside the door of a polling place in Philadelphia in paramilitary outfits. One of the men was carrying a nightstick. The two men were caught on video seemingly intimidating voters.

While George W. Bush was still president, the Justice Department filed a lawsuit against the New Black Panther Party, which the liberal Southern Poverty Law Center classifies as a hate group. However, by May of 2009, the Obama administration’s Department of Justice and Holder, then-attorney general, dropped the case.

In 2010, Rep. Joe Sestak, who was challenging Sen. Arlen Specter in a Pennsylvania Democratic Senate primary, said that the Obama administration had offered him a job to dissuade him from entering the race.

Obama had endorsed Specter, who had recently switched allegiance from the Republican to the Democrat Party during the early months of Obama’s presidency. The White House did not answer questions on the matter for several months.

Issa, then-ranking member of the House oversight panel, suggested such an offer could be illegal. Specter also pressed Sestak to answer more questions about the alleged offer.

After Sestak defeated Specter for the nomination, White House counsel Robert Bauer released a memo asserting that nothing improper occurred and that Obama’s offer was to serve on an unpaid presidential advisory board that would allow him to continue to serve in the House.