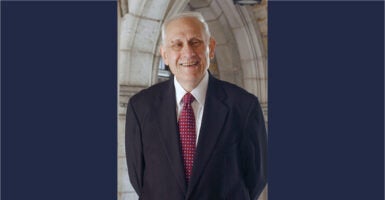 Donald Kagan, who taught history and classics at Yale University, and was widely revered as one of the university’s finest teachers and the nation’s greatest scholars, died on Aug. 6. (Photo: Yale University)

Donald Kagan, who taught history and classics at Yale University, and was widely revered as one of the university’s finest teachers and the nation’s greatest scholars, died on Aug. 6.

Kagan was the author of many books, and had a wide influence on the understanding of history and hence on the making of U.S. foreign policy, but his greatest work was his four-volume history of the Peloponnesian War from 431 B.C. to 404 B.C.

I was a graduate student in history at Yale from 1991 to 1999, and afterward a faculty colleague—in the most junior way imaginable—of Kagan’s. Because I was young and stupid, I didn’t take the opportunity to meet Don when I was a graduate student, imagining that an expert on Thucydides had little to teach a student who was writing on Britain’s policy toward the European Union after 1945.

And then came 9/11. In response to that attack, the Yale Daily News ran four columns by faculty members. Three of them were as limp as damp rags. I took the position—so poignant now, with the triumph of the Taliban—that it was time to mete out both justice and copious violence to al-Qaeda and the Taliban, their hosts, and enablers. Shortly after the piece ran, I received a phone call.

“Is this Bromund?” a gruff voice asked.

“This is professor Kagan. I want to meet you for lunch. I’ll see you at Mory’s at noon today.” With a click, the call was ended.

Much mystified and intimidated, I made my way to Mory’s—the unofficial campus club—and was escorted to the back, where Kagan was seated in the corner. I squeezed in across from him.

“Professor Kagan—it’s an honor to meet you. What are you working on?” I said, trying to kowtow.

Don looked at me ferociously.

“Forget about me!” he all but shouted, with eyes that twinkled happily. “I’m old, used up, tired. But you! You’re young, exciting, interesting, fascinating! Tell me more about yourself!”

I wasn’t exciting, interesting, or fascinating. And Don wasn’t used up. But that was Don in a nutshell. He loved life, he loved young people, he loved arguing, he loved to state his case and to hear yours, and he was devoid of any apparent ego—he was more than happy to argue with you about the meaning of a word in Thucydides without feeling any need to assert his authority. He was funny, he had more energy than his colleagues half his age, and he was compulsively interesting.

His colleagues on occasion called him a gadfly—my doctoral adviser used that very word to describe Don in his own appreciation of Don’s life and legacy. But I don’t believe Don was a gadfly. He didn’t sting for fun. He stung because he had coherent and deep-rooted beliefs—in the value of Western civilization, in the need for high academic standards, in his appreciation of virtues beyond the academic, and in the role of power and courage in human affairs—and he believed in defending his beliefs.

After our first encounter at Mory’s, we met on occasion for lunch or tea (yes, you can have formal tea at Yale, if you know where to go) and conversation.

Don was a conservative—though, like all thoughtful people, his reactions to life were too varied to be confined within an easily-definable ideology—and talking with him was a particular treat because, at a university that was steadily drifting toward being a liberal monoculture, he was as willing to challenge liberal pieties on campus as he was off of it.

Sadly, with his passing—and the death just a few months earlier of Ambassador Charles Hill—Yale now has no identifiably conservative senior scholars. Yes, there are some who are not clearly party-line progressives, but by and large, the cleansing is complete, and it is now possible to graduate from Yale without even the opportunity to meet a senior scholar who definitely disagrees with the prevailing consensus.

His death is a loss to scholarship, to teaching—you can watch him lecture on Greek history here, discuss his views here, and present his valedictory address here—and to the genuine diversity of intellectual life in the American academy in general, and Yale in particular.

Yet most of my memories of Don revolve not around Yale, but around national affairs. I recall asking him, around 2006, when the George W. Bush administration was in its deepest doldrums, what he thought of the president. He looked at me and said, “Well, he’s not doing very well, is he? But I had Reagan—and you only get one in your lifetime like him. So I’m content.”

And that was true of Don. If you meet one man in your life like him, you should be content.