Are These 7 LGBT ‘Kids’ Books in Your Child’s Classroom or School Library? 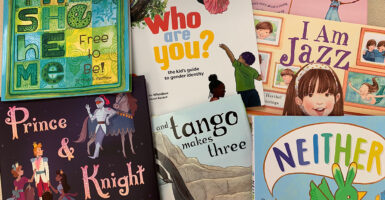 Children’s books promoting various LGBTQ agendas have made their way into school classrooms and libraries across the county. (Photo: Virginia Allen/The Daily Signal)

Children are learning about gay marriage, preferred pronouns, and gender identity, thanks to woke children’s books.

“I have a girl brain, but a boy body,” the book “I Am Jazz” says. “This is called transgender. I was born this way.”

“I Am Jazz” was published in 2014 and authored by Jessica Herthel, a transgender rights advocate, and Jazz Jennings, the honorary co-founder of the TransKids Purple Rainbow Foundation and star of the TLC reality-TV show “I Am Jazz.”

The book is based on the true story of Jazz Jennings, a male who from a very young age identified as a female.

“I Am Jazz” has received a number of awards, including the American Library Association’s Rainbow Project Book List Award in 2015. It was one of the first woke kids’ books to crash onto the children’s literature scene, but it certainly has not been the only one.

If one searches for “I Am Jazz” on Amazon and then scrolls down to “similar books,” you will find an array of children’s stories promoting the LGBTQ agenda.

Beyond the sexual messages of the books being inappropriate for children, there are also mental health concerns involved, Eckert said.

Research shows that early exposure to sexual content is linked to poor mental health, risky sexual behavior, and even pornography addiction in adulthood.

Even if kids may not fully understand what they are seeing and hearing, they are being shaped by the messages and learn to act on them.

By including or promoting books like these in the classroom, schools are harming, not helping, children.

Brenda Lebsack, a California teacher, former Orange Unified School District board member, and founder of Brenda4Kids, encourages parents to be involved in their children’s school and know the types of books they are being exposed to in the classroom.

“I advise parents to ask the principal and their child’s teacher, at the start of the school year, if lessons on gender identity will be included in the classroom, school, or library,” Lebsack told The Daily Signal in an email Tuesday.

Woke children’s “books that confuse kids about their gender are also in public libraries all over the nation [filed] under diversity, anti-bullying, anti-racism, and inclusion,” Lebsack said.

The California teacher added that parents can stand against the far-left agenda in their child’s school and “empower other parents and like-minded teachers” by asking “questions in public at back-to-school night, PTA meetings, and board meetings.”

The following are six more popular LGBTQ children’s books to look for in your son’s or daughter’s classroom this fall:

‘They She He Me: Free to Be!’ by Maya and Matthew Smith-Gonzalez

The colorful, albeit text-heavy “They She He Me: Free to Be!” is written as a kids’ guide to pronouns.

“Not only can he and she mean more than what people think, there are also more pronouns than just she and he,” authors Maya and Matthew Smith-Gonzalez write.

The book begins with 18 illustrated pages of children and adults standing side by side in shades of green, blue, and yellow. Some look like boys, others like girls, and some appear gender neutral.

The following six pages explain the concept of pronouns to children and how kids can change their pronouns because “only you can know what pronoun expresses the spirit of who you are on the inside.”

Even “tree” can be a pronoun, according to the book’s authors. “You can change pronouns from he to she or from she to he, you can use new ones like ze, or create your own like tree!”

The book encourages children to explore pronouns and ultimately be called by “what feels right to you.”

The rhyming story “Prince & Knight” puts a homosexual twist on the classic tale of a prince in search of his true love.

In the first few pages, we meet a “handsome and sincere” prince who needs a bride before he can take his place as king. But none of the ladies the prince meets are right for him.

“The prince met many ladies (and he made them all swoon!), but it was soon clear that he was singing a different tune.”

When a dragon attacks the prince’s kingdom, he rushes to fight the beast. But the prince can’t beat the dragon alone. Enter the knight.

Together, the prince and the knight defeat the dragon. Embarking on such a dangerous act of courage would likely unite the two strangers in brotherly friendship in a classic children’s story, but not in this tale.

“The knight took off his helmet to reveal his handsome face, and as they gazed into each other’s eyes, their hearts began to race.”

To solidify the relationship between the two men, the story ends with a wedding.

“And on the two men’s wedding day, the air filled with cheer and laughter, for the prince and his shining knight would live happily ever after.”

‘Who Are You?’ by Brook Pessin-Whedbee

Complete with a gender wheel, “Who Are You?” is a “kid’s guide to gender identity.”

The book begins by explaining that everyone has a sex “assigned” to them at birth, but “[s]ometimes people get this confused with gender. But gender is much more than the body you were born with.”

Pictures of children playing and exploring are accompanied with text about gender choices.

“And for some people, there are more than just two choices. These are just a few words people use: trans, genderqueer, non-binary, gender fluid, transgender, gender neutral, agender, neutrois, bigender, third gender, two-spirit … .”

The second section lets kids spin the wheel to choose “I am … ” and lets them select from a list of 18 options, including “sometime a girl and sometime a boy,” “trans,” and “genderqueer.”

And the third section of the wheel gives children the opportunity to pick what they like, from vests and headbands to dancing, reading, or making forts.

‘My Princess Boy’ by Cheryl Kilodavis

The colorful pink pages of “My Princess Boy” tell the story of a 4-year-old boy who likes to play “dress up in girly dresses” and “dances like a beautiful ballerina.”

Written from a mother’s perspective, the book shares how the family of “Princess Boy” supports him in his love of all things pretty and pink.

“And his brother dances with my Princess Boy.”

“His dad tells my Princess Boy how pretty he looks in a dress.”

We learn that “Princess Boy” is “happiest when looking at girls’ clothing” while shopping.

The story leaves readers with a few questions to ponder.

‘And Tango Makes Three’ by Justin Richardson and Peter Parnell

The beautifully illustrated “And Tango Makes Three” tells the story of two male penguins in Central Park Zoo that “did everything together.”

While the other male and female penguins partner off with one another, Roy and Silo stick side by side.

The two penguins love spending time together, but they are sad because they cannot lay an egg like the other penguin couples. When the zookeeper sees them build a nest and sit on a stone to try to hatch an egg, he has an idea.

The zookeeper “found an egg that needed to be cared for, and he brought it to Roy and Silo’s nest.”

Roy and Silo take turns sitting on the egg and caring for it until one day “out came their very own baby!”

“She had fuzzy white feathers and a funny black beak. Now Roy and Silo were fathers. ‘We’ll call her Tango,’ Mr. Gramzay decided, ‘because it takes two to make a Tango.’”

‘Neither’ by Airlie Anderson

Only bunnies and birds live in the land of “these and those,” but one day “both” or “neither” is born.

The bunny/bird leaves the “Land of This and That” to find a new home in “The Land of All,” where there are “many different kinds.”

The colorful picture book concludes by showing readers the “many kinds: this and that, somewhat and whatnot, either, very, sort of, just, rather, a little, neither and both … .”