Biden’s Unprecedented Attack on the Constitution 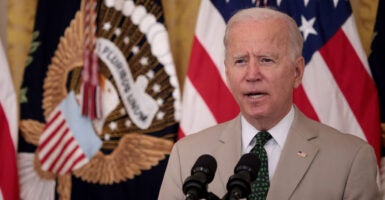 Joe Biden certainly isn’t the first president to violate his oath of office, but he might be the first in memory to openly brag about doing it.

Not likely? It already failed.

In June, Justice Brett Kavanaugh agreed with the majority Supreme Court that the CDC “exceeded its existing statutory authority,” even though he allowed the order to sunset. The president admitted as much, noting that the new moratorium is meant to give the administration time to act on “rental assistance” before the court again shuts it down. What stops Biden from stalling and trying a third time? A 10th time?

Biden admitted to the media that he would be circumventing the courts, the law, and his oath of office, in which he promised, to the best of his ability, to “preserve, protect, and defend the Constitution of the United States,” not to infringe on the property rights of Americans to placate crackpot socialists in his party.

When asked today about the discrepancy, White House press secretary Jen Psaki promised, “This is also going to be a temporary solution.” Because, as Article 2, Section 5, apparently states, the executive can make laws irrespective of Supreme Court rulings, as long as he also crosses his heart and promises it’s only going to be temporary.

When pushed further on the matter, Psaki could not recall the moment when Biden was convinced there was solid legal ground to move forward. Probably because no such moment exists.

Rep. Alexandria Ocasio-Cortez, D-N.Y., was far more honest, noting that this was “a huge victory for the power of direct action and not taking no for an answer.”

Not taking no for an answer—in this case, not taking no for an answer from the Supreme Court—is lawlessness. The process—the sacred norms that Democrats pretended to care about over the past five years—is irrelevant to engaging in “direct action” within government. It’s been clear from their efforts to delegitimize the Supreme Court to their effort to undermine faith in federalism and countermajoritarian institutions.

None of this is to even speak of the tremendous abuse of power inherent in the underlying eviction moratorium itself. Biden’s new 19-page order includes draconian penalties, fines, and potential jail time for violating a concocted “law.” Forget that it’s terrible public policy; it is also, as I noted when it was first issued by the Trump administration, state-sanctioned theft. At best, such an “emergency” infringement should be left to state and local municipalities.

Does anyone really believe that the Founders would approve of the CDC—an incompetent agency tasked with dealing with infectious diseases—retroactively ripping up millions of legal contracts and unilaterally suspending the property rights of 90% of landlords? If it can do that, what can’t it do?

Some have argued that former President Donald Trump’s reappropriation of funding for a southern wall or former President Barack Obama’s power grab on the Deferred Action for Childhood Arrivals program paved the way for this kind of executive abuse. But neither the wall nor DACA policies had yet been adjudicated by higher courts when they were put into play.

Obama had, on numerous occasions, admitted that he had no constitutional authority to enact amnesty for millions of Americans by fiat. In 2010, he said, “I am not king. I can’t do these things just by myself.” The next year, he again acknowledged that, as president, he was not empowered to “just bypass Congress and change the law myself. … That’s not how a democracy works.”

Obama, of course, didn’t believe in any such limitations, and he went ahead with DACA anyway. Yet not even he enacted the executive action after the Supreme Court ruled it unconstitutional. That is unique.

You can imagine what the future looks like once we’ve normalized the idea that presidents can regurgitate unconstitutional executive actions as long as the polling is positive.

One of the often repeated—and legitimate—concerns regarding Trump was that he would simply ignore the will of the court. That is exactly what Biden is doing right now. Writers at major outlets such as The Washington Post and CNN are already celebrating this lawbreaking as a moral good.

Democrats will dutifully defend the president, talk about the purported benefits of the moratorium, and ignore the unconstitutional manner in which it is implemented.

House Speaker Nancy Pelosi, an alleged leader of the legislative branch of the American government, pressured Biden to ignore Congress and the courts. Senate Majority Leader Chuck Schumer celebrated the decision. And it is highly unlikely that a single Democrat will stand up and speak up for the rule of law.