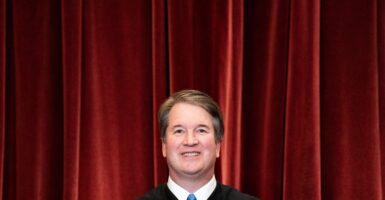 Supreme Court Justice Brett Kavanaugh, seen here April 23 during the taking of a group photo of the justices, did a disservice to the rule of law with his June opinion allowing the Centers for Disease Control and Prevention's continuation of an eviction moratorium that had no basis in law. The high court will now have to revisit the issue. (Photo: Erin Schaff/AFP/Getty Images)

That might seem like a no-brainer to most people, but some judges can’t seem to figure that out.

Exhibit A is Supreme Court Justice Brett Kavanaugh, who’s about to eat his own words from just a month ago.

The story starts with the Centers for Disease Control and Prevention’s eviction moratorium, which was put into effect under President Donald Trump last September amid the coronavirus pandemic.

The moratorium was unconstitutional and beyond the CDC’s power from the start.

You needn’t take my word for it. Take Kavanaugh’s.

When the inevitable legal challenges to the moratorium arrived at the Supreme Court, he wrote: “I agree with the District Court and the applicants that the Centers for Disease Control and Prevention exceeded its existing statutory authority by issuing a nationwide eviction moratorium.”

Only Kavanaugh wrote an opinion, but four other justices would have blocked the moratorium, so Kavanaugh’s judgment that it was unlawful should have ended things. It didn’t.

Kavanaugh decided that although the moratorium was against the law, it should be allowed to stand because “the CDC plans to end [it] in only a few weeks” and “those few weeks will allow for a more orderly distribution of the congressionally appropriated rental-assistance funds.”

What sort of judicial philosophy is that? It’s not just untethered to the law, it rejects the law outright in favor of his personal policy judgments.

And how rich is the irony that Kavanaugh ends this bit of judicial “jiggery-pokery” by reminding the nation that only Congress has the power to enact an eviction moratorium?

His opinion escaped the fierce critique it should have gotten, presumably because his colleagues and legal commentators assumed that he was right that the CDC would not renew its eviction order. But it should not have escaped scrutiny because, in permitting the moratorium to continue, even for a brief time, Kavanaugh rejected the proper role of the judge, which is to faithfully apply the law.

After much angst, crying, and virtue signaling from Congress’ most left-wing members, President Joe Biden gave in, and the CDC on Tuesday issued a new eviction moratorium through October.

What a great time to be a president with a somewhat lackadaisical approach to the rule of law. If I were such a president, I’d create all sorts of unlawful policies, give them short durations, and renew them over and over again.

Why not? Kavanaugh rubber-stamped it once, so he might do it again, and I’d have nothing to lose by trying.

Had Kavanaugh done what a judge ought to do, the moratorium saga would have ended in June. Instead, he put us through another partisan fight, forced those harmed by the moratorium to go to court again, and ensured that the Supreme Court will face the same issue a second time.

Will Kavanaugh own up to his mistake or will he say that because the new moratorium is set to expire in October, he’ll permit just a little more lawlessness?