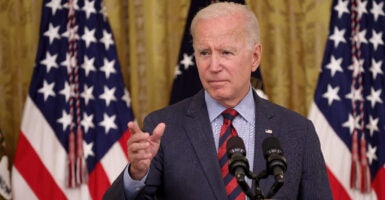 President Joe Biden takes questions during an event in the East Room of the White House where he addressed the importance of people getting a COVID-19 vaccination Aug.3 in Washington. Biden also said New York Gov. Andrew Cuomo should resign following a state investigation that found Cuomo has sexually harassed multiple women. (Photo: Win McNamee/Getty Images)

President Joe Biden on Tuesday took swipes at governors of three of the nation’s most populous states, telling one to resign from office over sexual harassment allegations and two others to “get out of the way” regarding COVID-19 policy.

New York Gov. Andrew Cuomo, a Democrat, and Republican Govs. Ron DeSantis of Florida and Greg Abbott of Texas, were on the receiving end of the president’s remarks.

During an East Room press conference at the White House, Biden said vaccinations rates were improving. He also touted the United States’ vaccine donations to other countries.

However, he said some states were lagging behind. The president specifically criticized Texas and Florida—both with Republican governors—for prohibiting mask mandates in jurisdictions such as universities, schools, and local governments.

Most significantly, Biden called on fellow Democrat Cuomo to resign from office.

“He should resign,” Biden told reporters when asked about the 165-page independent report, overseen by New York Attorney General Letitia James, that found 11 women had credible claims of sexual harassment against Cuomo.

Interestingly, Biden—known himself for awkward hugs and touching—said some of Cuomo’s hugs might have been “totally innocent,” but relied on the report.

“I’m sure there were some embraces that were totally innocent, but apparently the attorney general decided there were things that weren’t,” Biden added.

When asked if the New York Assembly should impeach Cuomo, Biden wouldn’t go that far.

“Let’s take one thing at a time here. I think he should resign,” Biden said. “I understand the state Legislature may decide to impeach. I don’t know that for a fact.”

Biden said in March that if the multiple allegations of sexual harassment were shown to be true, then he would call on Cuomo to resign.

After the report, Cuomo denied the allegations. The New York State Assembly has begun an impeachment inquiry already. Though a majority of state lawmakers are Democrat, Cuomo has had a falling out with some members of his party.

Biden criticized Texas and Florida, but didn’t refer to Abbott and DeSantis by name, only by title.

“Just two states, Florida and Texas, account for one-third of new COVID-19 cases in the entire country—just two states,” Biden said. “Look, we need leadership from everyone. If some governors aren’t willing to do the right thing to beat this pandemic, then they should allow businesses and universities who want to do the right thing to be able to do it.”

Biden said the Texas and Florida governors were engaged in bad health policy.

“I say to these governors, please help,” Biden said. “If you aren’t going to help, at least get out of the way so that people who are trying to do the right thing. Use your power to save lives.”